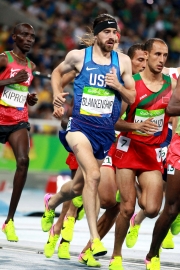 Ben Blankenship, in 2022, launched Fast Forest at Dorris Ranch in Springfield, OR that immortalizes U.S. Milers who have broken the recognized sub-4 minute and sub-4:30 standards; each Miler has a tree planted with a tag listing first sub-4 or sub-4:30 date order, name, time, date and location.

He is currently training for the marathon under the guidance of two-time Olympian Ryan Hall who has recorded the fastest marathon by an American, clocking 2:04:58 at Boston in 2011.

In 2017,  the Minnesota native earned the USA Indoor Mile title, clocking 3:59.22, in Albuquerque, NM (6th fastest indoors at altitude). In May, he easily defended his Medtronic TC 1 Mile crown in 4:01, and at the end of July in Pittsburgh, he also repeated as GNC Live Well Liberty Mile champion, recording 4:05 under windy, damp conditions. In September, the Rio Olympian won the Minnesota Mile in a blanket finish 4:07, edging out Trevor Dunbar, Riley Masters and Patrick Casey, and on September 16, he ran the fastest Mile on Alaskan soil, 3:57.85, in Kodiak. On October 1, Blankenship capped his outstanding racing season with a 4th place finish at The Navy Mile to secure the BBTM Grand Prix #Tour2017 title.

The two-time NCAA All-American at the University of Minnesota won the 2013 Minnesota Mile, setting a course record of 3:52.7 (also the fastest Mile ever run in his home state), and the Falmouth Mile, clocking 3:56.27 to edge fellow Minnesotan Will Leer, and later in August, he took the Michigan Mile title in 4:06 to capture three Bring Back the Mile Tour 2013 wins.

FUN FACT: Blankenship has a tattoo of his home state of Minnesota on his outer right thigh.

EUGENE, Ore. – Ben Blankenship has unveiled his non-profit the Endless Mileage Project, an organization dedicated to the intersection of sustainability and the running community.

Ben Blankenship: “I’m a man of The Mile”

"I have always said, I’d rather run the hardest race right away than pick my way through it. I’ve always kinda liked to run those gauntlets and kind of find myself in the harder heats if possible.”

“I wake up every morning and remind myself: ‘I don’t have...

Catching Up with Ben Blankenship

I can't wait to return to the Liberty Mile! From the course to the crowd, the event management team and sponsors to my competitors, it is always one of the highlights of my racing season. Pittsburgh is a great place to run.

SANTA BARBARA, Calif. – At the Bring Back the...

Blankenship, of Eugene, Oregon, topped a...

"I always want to finish a race knowing I worked as hard as I could. That I did everything I could, and I couldn't have done any better."

Ben Blankenship is a 2016 Rio Olympian and a national champion Miler, a Nike-sponsored athlete who competes in Diamond...

NEW YORK – The USA’s Jenny Simpson raced to her record-extending sixth win – matching the event record time of 4:16.6 in the...

Kampf captures women's race also in blanket finish; 4th stop on the Bring Back the Mile Grand Prix Tour 2017; finale on Sunday, October 1 at The Navy Mile in Washington, DC

Just before he arrived back in the United States last week from the IAAF World...

DULUTH, Minn. – A premier class of Mile runners are...

U.S. Olympian returns to his native state to defend his Medtronic TC 1 Mile title against two-time Olympic medalist Nick Willis and a field of top contenders at the second stop of the BBTM Grand Prix #Tour2017.

American Mile star and Olympian Ben Blankenship has been on...

12th event edition second stop on the Bring Back the Mile Grand Prix Tour 2017; Minneapolis riverfront course to host more than 2,500 runners on Thursday, May 11

PITTSBURGH – This year’s increased prize purse of $30,000 has attracted some of...

Blankenship had a heartbreaking fourth place finish at the 2015 USA Outdoor Chamionships missing the World's team by 0.02 seconds. Now he is looking towards 2016 in Rio.

At the beginning of May, after helping a U.S. team set the world record in the distance medley relay, Ben Blankenship said, “Nothing that I do in the next six or seven weeks will...

Rising U.S. Mile star Ben Blankenship has cultivated a rather unique look and has a distinctive personality to match. Here’s our special guide to being Blankenship.

Ben Blankenship had long hair throughout his high school years until one day, in his sophomore year...

"You gotta be tough. Every time you get out there it’s always hard. There are no real free rides in this sport."

Three years ago, Ben Blankenship was injured and working in excavation with a friend in Colorado. The NCAA runner-up in the 3000m at Minnesota the...

WICHITA, Kan.  – At the Kansas Road Mile Championship presented by the Kansas Spine & Specialty Hospital and GoRun Wichita, Ben Blankenship and Kristen Findley won the inaugural overall titles in 4:05 and 4:50,...

Ben Blankenship is on the Comeback Trail

When Ben Blankenship, who has clocked a 3:54 Mile, looks out the window of the "house on the hill" in Eugene, that he shares with Hassan Mead, he sees "the cathedral," Hayward Field at the University of Oregon.  It has become one of the training sites Blankenship will...