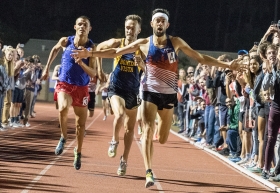 
Kyle Merber, who retired as a professional runner in January 2021 and now produces a weekly newsletter called The Lap Count, recorded a 2:38:28 debut time at the 2022 TCS New York City Marathon.

On April 13, 2018, Merber won the inaugural HOKA ONE ONE Santa Barbara Elite Mile, clocking 3:57.74, the first track sub-4 in the California coastal city ever!

In 2017, he finished third at the Wanamaker Mile, setting a then indoor Mile personal record of 3:54.67, and six days later on February 17, Kyle & his NJ*NY Track Club teammates set a 4 x Mile indoor world record, clocking 16:12.81, also at the Armory in New York City. At the BU Last Chance Meet on February 26, Merber finished second in another PR behind Edward Cheserek's collegiate indoor record, 3:52.01 to 3:52.22. On September 13, Kyle recorded the first outdoor sub-4 minute Mile on Alaskan soil, breaking the beam in 3:59.36.

More than anything, the lockdown, in an odd and unexpected way, has led him to rediscover the joy of running.

On an overcast morning in late March, a few days after the International Olympic Committee announced it was postponing the 2020 Tokyo Games...

Kyle Merber is tied into so much history in the Mile, it almost seemed fitting the HOKA ONE ONE New Jersey / New York Track Club standout was the one leading his peers Friday in writing another...

Man’s first conquest of the 4 minute Mile barrier will soon be 64...

By Chris Pleasance for MailOnline

While many Americans might like to claim a little Irish blood in their veins, the country's culture and...

If you follow American Track & Field, you’re probably familiar with Kyle Merber. However, unless you’ve been closely following his career, you may not be...

On historic night of running, two break sub-4 minutes in the Mile in Anchorage

"It's great to see these athletes up here, especially so the younger kids can see it and get some inspiration. It's nice exposing them to athletes of this caliber."

Dunbar, the only Alaskan to break...

What makes a meet great from an athlete’s perspective

Athletes want to be seen. Both for their self-esteem and for their sponsors who are paying them to be seen in their gear.

Everyone is so concerned with putting on good track meets to entertain the fans, but what do the athletes want? Maybe we have needs too! There...

A Relay World Record, PRs and More for Kyle Merber in 2017

“A lot of coaches can just get you in shape. It takes a special coach to get you to believe."

If his trademark headbands help you to locate Kyle Merber in a crowded race, you are not alone.

"It's easy for my mom to follow me," the native New Yorker Merber...

Gearing up for Millrose Games' Wanamaker Mile, training and being a New Yorker

I hopped on the phone with my friend and former teammate, Kyle Merber, to chat about his upcoming appearance in the Wanamaker Mile. I figured I’d write up a tidy little page-long...

The legendary coach, now in his seventh year at the helm of ...

Throughout the long and glorious history of track & field in the United States,...

Over the summer, professional runners Erik van Ingen (a 3:56 Miler), Kyle Merber (a 3:54 Miler), and Aric Van Halen (yes, the son of that Van Halen) were hanging out at a cross country camp in...

Kyle Merber uses Madrid as tune-up for Pan Am Games

Kyle Merber and Andrew Wheating head the U.S. Team in the 1500 for the Pan Am games in Toronto; considered favorites for gold and silver

On a dry and warm night in Madrid, Kyle Merber (HOKA ONE ONE) stepped off the track after a third place finish in the men's 3000...

It was one of the first days of practice in October, and we were huddled inside the shed at Rutgers University...

Kyle Merber is the U.S. Collegiate Record Holder in the 1500m with a time of...

“EL GUERROUJ! LAGAT! TO THE LINE! EL GUERROUJ GOT IT!” When I was thirteen years old, I remember watching the Olympic 1500 final in Athens 2004 and having my eyelids peeled back as I stared at the screen in awe. At this point in my running career, I did not fully understand the...

After an ever brief pause, Williams responded, "Wow. That's...