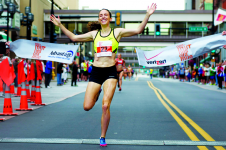 Blankenship, 26, a Stillwater native with a Mile personal best of 3:52.7, will seek his first USATF 1 Mile Road Championship crown in Thursday evening’s race in downtown Minneapolis. The former Big Ten champion returns to his home state after a runner-up finish in the Kawasaki Seiko Golden Grand Prix 3000 meter in Tokyo on Sunday.

Grunewald, 29, a Perham native who won the USATF Indoor 3000m title in 2014, returns to the Medtronic TC 1 Mile after finishing third in the event in 2011. Grunewald, a cancer survivor, will open her 2016 season at the race. She is a two-time winner of Duluth’s Minnesota Mile, where she is the course record holder for women.

Men’s and women’s professional fields are now set for the event which moves to a new Minneapolis riverfront course this year. In all, 13 men and 13 women will race in the USATF 1 Mile Road Championship waves which culminate an evening of racing where more than 2,200 runners will compete over one of the sport’s signature distances.

This year marks the sixth time the Medtronic TC 1 Mile has hosted the USATF 1 Mile Road Championships. The event is also the second stop on the Bring Back the Mile Grand Prix Tour that offers a $10,000 grand prix prize purse. Kampf is a three-time BBTM Grand Prix Tour winner.