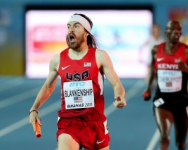 "You gotta be tough. Every time you get out there it’s always hard. There are no real free rides in this sport."

Three years ago, Ben Blankenship was injured and working in excavation with a friend in Colorado. The NCAA runner-up in the 3000m at Minnesota the year before during which he ran 3:54 for the Mile and 7:49 for 3000m wasn’t getting ready for the Olympics or Olympic Trials, rather he was mulling giving up on the sport if he couldn’t solve his injury woes. But after moving to Washington, DC that fall, Blankenship started working out again and was fit enough that Oregon Track Club head coach Mark Rowland asked him to take a chance and move out to Eugene. The past three years haven’t been all smooth sailing, but now that Blankenship has been able to stay healthy and log consistent mileage, he’s torn up the track in 2015.

Blankenship began 2015 by beating Galen Rupp in the 2-mile in his season opener at the Armory Track Invitational. He knocked out an IAAF qualifier with his 3:53.13 Mile in Boston the next weekend and by the end of the indoor season, he had added a 3:35.28 1500m PR and a pair of runner-up finishes at USA Indoors.

Blankenship has kept that momentum rolling outdoors, running a 3:51.24 anchor leg on the U.S.’s world record setting DMR at the World Relays in the Bahamas and taking fourth in the 1500 (3:35.48, outdoor PR) at Sunday’s Shanghai Diamond League event, the best DL finish by an American man in a 1500/Mile since Leo Manzano in July 2013. Up next for Blankenship is a Mile at the Pre Classic next weekend; as of now, he’s running the International Mile but still holding out hope to get bumped into the prestigious Bowerman Mile. After that, Blankenship doesn’t have any races penciled in on his schedule prior to USAs but may jump in one or two if the right opportunity presents itself.