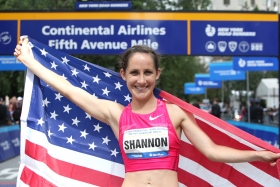 At the Herculis meet in Monaco on July 17, 2015, she broke the nearly 32-year-old U.S. women's 1500 meter record by Mary Slaney, clocking 3:56.29. Also in 2015, Shannon won the Camel City Mile presented by Mellow Mushroom Winston-Salem in a world leading 4:22.66, also a North Carolina state record, and the performance made the two-time U.S. Olympian the 5th fastest woman ever indoors for the storied distance.

Two weeks later, Rowbury captured the Wanamaker Mile crown at the 108th NYRR Millrose Games, clocking an unchallenged 4:24.32. At the 2015 USA Indoor Championships in Boston, the Duke grad earned her first indoor national Mile title with an unchallenged win in 4:34.40.

Rowbury is also a 5-time USA champion, including the 1500m title at the 2009 USA Outdoor Championships, the 2009 USA Road Mile title and a 2008 USA Indoor title at 3000 meters. The six-time NCAA All-American for Duke University was the 2008 NCAA Indoor Mile champion.

Shannon and her husband Pablo Solares welcomed their first child, Sienna Rosaleen Solares-Rowbury, born on June 30, 2018, and in October 2018, she was announced as a volunteer cross country & track coach at the University of San Francisco.

FUN FACT II: She is also the first American woman, since Mary Slaney, to have held the U.S. 1500m and 5000m records simultaneously.

Rowbury is undaunted by coronavirus or Olympics postponement

"I hope I can race well and show that even though I’m 35 and even though I have a child, my ability as an athlete hasn’t diminished and I deserve to have a contract, have an opportunity to toe the line at nationals, hopefully make that Olympic team and go after a medal.”

“I feel confident in the journey that I’ve taken... to see if I can make my fourth Olympic team because I definitely have my work cut out for me with that task alone.”

Shannon Rowbury has fought her way back into racing shape after the birth of her...

"It's fun to be involved with building something. I like being able to get in on the ground floor and craft and create a legacy."

From University of San Francisco

SAN FRANCISCO — One of the greatest American female distance runners of all time is joining the University of San Francisco men's...

"You can't change the past but you can try to affect a better future..."

Half a second - it's about the time it takes for an eye to blink, or for Steph Curry, the fastest shooter in the NBA, to release a jump shot. It's also the length of time by which Shannon...

The world record holder was overtaken with 200 meters to go by this year’s fastest woman. Americans Jenny Simpson and Shannon Rowbury finished 3rd and 4th respectively.

In the first real upset in a middle-distance or distance final of these Games, Kenya’s...

The American distance crew capped its impressive weekend with four more medals at the IAAF World Indoor Championships on Sunday,...

“You’re never going to achieve any goals if you don’t put yourself out there.”

The Wanamaker Mile is always the fitting finale of the Millrose Games, the country’s premier indoor track meet, and this year’s showdown between Matthew Centrowitz, the reigning...

The NYRR Wanamaker Mile at the 109th NYRR Millrose Games will feature a riveting rematch between defending champion Matthew Centrowitz, of Portland OR, and 2015 runner-up and the fastest...

I’m really, really proud of what I’ve accomplished. I’m so fortunate to have had such a successful year.

From Spikes powered by IAAF

Over the last seven years Shannon Rowbury has been one of the USA's most consistent middle distance performers. In 2015 she proved herself as one of the best...

“I know it motivates me to perform better and I would imagine it does the same for her.” – Rowbury on her rivalry with fellow ace American Miler Jenny Simpson

I have this meal the night before a race, but also pretty regularly. It's my go-to favorite. I had it in Portland before leaving for Asia.

Two-time U.S. Olympian Shannon Rowbury, the U.S. record holder in the 1500 meters, knows exactly what she likes to eat. So much so...

How to Survive Running in a Pack—and Break Free

"It's tit-for-tat, so you're not making a lot of decisions. When they go, I go. When they slow down, I slow down. Finally, you're preparing for when you're going to strike. It's empowering to determine when to strike. It's a much more predatory position than leading a race and having to fend...

What a race. This race has it all.

One is a former world champion, the other the American record holder.

The United States could take home two of the three medals in the women’s 1500 meters at the IAAF World Championships, which begin August 22 in Beijing. Jenny Simpson and Shannon Rowbury...

"Seeing how much my fitness has progressed gives me the confidence that I have the ability to race with the best in the world. That’s what it will take to get on the medal podium."

On July 17, at the Monaco Diamond League meet, Shannon Rowbury of the...

How Many Medals Can the U.S. Middle Distance Women Win in Beijing?

Rivalries aside, the 2015 World Championships and 2016 Rio Olympics will be a thrill for fans of American middle distances.

By now you’ve already seen or heard about Shannon Rowbury’s 1500m American record. If you didn’t, it came during a race where Ethiopia’s Genzebe...

Shannon Rowbury a S.F. celebrity who flies under radar

The two-time Olympian and USA champion is a proud, fourth-generation San Franciscan who says she can’t imagine living anywhere else.

San Francisco is a city full of celebrities that no one recognizes. Or maybe it takes an insider to pick up on who...

By David Monti for Runner's World

WINSTON-SALEM, N.C. – With the lights turned low, the music loud, an energetic crowd and ready-to-race athletes, the 3rd Camel City Elite Miles at the...

Running is just a dance for Shannon Rowbury

I have some time before I have to make a decision on which distance to race in the Olympics and I will watch and see how the competition pans out as we get closer.

Shannon Rowbury is one of America’s best middle-distance runners. She has...

For Rowbury, a Week of Start Lines

This has been a big week for Shannon Rowbury, and it’s far from over.

On Tuesday, while Rowbury was in Golden Gate Park doing the last hard workout of her...

“I would like to thank Coach Cook for everything he has done for me."

Shannon Rowbury, the 2009 World Championships 1500 meter bronze medalist who has been a finalist in two Olympic 1500s, will join Coach Alberto Salazar and the Nike Oregon Project after...

Two-time Olympian at 1500 meters is in the Prefontaine Classic 5000.

Shannon Rowbury, two-time Olympic 1500 meter finalist and bronze medalist in the 1500 at the 2009 World Championships, may be in an unfamiliar position at 3:22pm Central Time on Sunday,...

Catching Up with Shannon Rowbury

For the past six years, Shannon Rowbury has defined herself in the sport as a one of the most consistent elite 1500m runners, exceling at running rounds and running incredibly smart tactics. Her top level fitness and race smarts have led to three U.S. outdoor 1500m...

The elite fields for the 2013 USA Men's and Women's 1 Mile Road Championships on Tuesday, April 23 in Des Moines will feature an Olympic silver medalist.

Although Rowbury lives in San Francisco, you may spot her during or after training around Berkeley.

San Francisco is home to the fastest female 1500-meter runner in the U.S. Shannon Rowbury, but Berkeley is where she logs a lot of her toughest Miles.

Shannon Rowbury of San Francisco is a two-time Olympian in the 1500m and most recently placed sixth in the final at the Olympic Games in London last August–the best performance by an American woman in that event in the modern Olympics.

LONDON -- Morgan Uceny of Plymouth, Ind., and world champion Jenny Simpson today both advanced to semifinals of the women's 1500 meters at the Olympic Games.

Top six from each of three heats, plus the next six times, qualified for Wednesday's semifinals...

“I feel like I can get better as the rounds progress because I’m able to recover quickly and bounce back.”
By David Monti, (c) 2012 Race Results Weekly, all rights reserved

Andy Chan first witnessed it 14 years ago, and has seen it hundreds of times since.

It’s the simple sight of his former student, Shannon Rowbury, jumping up and down two to three times before each and every race. But four years ago at the Beijing...

At the 2008 Beijing Games, the Americans didn't get near the podium in the 1,500 meters or the long jump. But on the final day of the Olympic trials Sunday, the U.S. picked squads in the two events that could...

By David Woods, The Register-Guard

Since the Olympic Games introduced the 1,500 meters for women in 1972, the race has been dominated by Eastern Europeans and Africans. No American has ever won a medal.

4 Minutes with a Miler: Shannon Rowbury

Bring Back the Mile’s podcast series, 4 Minutes with a Miler, speaks to U.S. Olympian and #2 Miler on the U.S. list with a 4:20.34, Shannon Rowbury. Shannon, a Bay Area native and Duke University grad was a founding member of the Bay Area Track Club and is coached by John Cook. The interview is...

The 2008 Olympian proves that constant goal setting is a sure path through injury.
By Jon Gugala, Competitor Magazine

One of Shannon Rowbury’s competitors said it best: “She just can’t believe that she’s not a better athlete than every other girl out there.”

That competitor, who will remain...