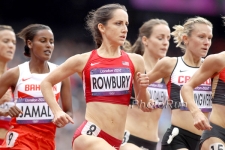 “I would like to thank Coach Cook for everything he has done for me."

Shannon Rowbury, the 2009 World Championships 1500 meter bronze medalist who has been a finalist in two Olympic 1500s, will join Coach Alberto Salazar and the Nike Oregon Project after she completes her 2013 competitive season with an appearance at the NYRR Fifth Avenue Mile in New York on Sunday.

“I spoke to Alberto several times over the past few months and feel he is the right person to take me to the next level in my running career and further explore my potential in both the 1500 and 5000 on my road to the 2016 Olympic Games in Rio,” said San Francisco native Rowbury in a statement released by her agent.

Rowbury will join a group that includes Treniere Moser and high school sensation Mary Cain, the top two finishers in the 1500 at June's national championships. On the men's side, the Oregon Project includes double Olympic champion Mo Farah; Olympic 10,000 meter silver medalist Galen Rupp; Matthew Centrowitz, who's been a bronze and a silver medalist in the last two World Championships 1500s; and Dathan Ritzenhein, the fastest American marathoner of 2012.