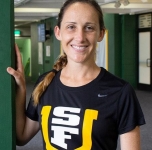 "It's fun to be involved with building something. I like being able to get in on the ground floor and craft and create a legacy."

From University of San Francisco

"We are thrilled to have Shannon involved in our program," said McCurry. "Her longevity at the highest levels in our sport is truly remarkable. More critical to us, though, is her tremendous character and the mentoring she can provide our young women and men as they aspire to reach their own athletic potential. Throw on top her San Francisco roots and it's a home run on all fronts."

"Given the caliber of athletes here and the quality of coaching, I think it's a great opportunity for all of us to work together to reach a very high level of success," said Rowbury.

WORLD CLASS EXPERIENCE
Rowbury brings to The Hilltop more than a decade of experience competing at the highest levels of cross country and track, winning championships and setting records all along the way. She has competed in three different Olympic Games (2008-2012-2016) and is a seven-time USA champion (four indoor titles, two outdoor titles, one road Mile championship). She has held multiple American records, including the current U.S. record in the 1500 meters at 3 minutes, 56.29 seconds. She is the former American record holder in the 5000 (14:38.92) and 2 mile (9:20.25). Rowbury was also part of the world record setting U.S. outdoor distance medley relay team in 2015, a record that still stands today at 10:36.50.