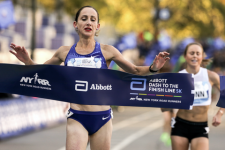 “I feel confident in the journey that I’ve taken... to see if I can make my fourth Olympic team because I definitely have my work cut out for me with that task alone.”

Shannon Rowbury has fought her way back into racing shape after the birth of her daughter, Sienna, 16 months ago. That was evident as Rowbury won the USATF 5K Championships on Saturday, November 2 in New York, clocking 15:43, one second ahead of Jessica Tonn.

But Rowbury’s fitness came back a little too late for the championship portion of the 2019 track season.

Throughout the fall, however, she continued training hard—and turned in better results. In addition to her road victory in New York today, in September, she ran 15:05.99 for 5000 meters in Berlin, a time that qualifies her for the Olympics in Tokyo next year, should she make the U.S. team.

Meanwhile, Rowbury, 35, has unwittingly found herself involved in two of the biggest stories of 2019 in running: how shoe sponsors support athletes who become pregnant and the ban of Alberto Salazar, head coach of the now-defunct Nike Oregon Project, for four years because of anti-doping violations.

Rowbury spoke to media in New York for about 20 minutes on October 31 about returning to running after giving birth and how she felt about having her former team, the NOP, shut down.

In May, former Nike athletes Alysia Montaño and Kara Goucher told The New York Times that Nike reduced their pay during pregnancy. In a separate Times story, sprinter Allyson Felix said she couldn’t come to terms on a contract with Nike that would continue to pay her should she become pregnant. Felix had a daughter last November, returned to competition in the 400 meters this summer, and has since inked a deal with Athleta.

Nike announced that it would change its policy to offer 12 months of continued pay for athletes who become pregnant—an announcement that came after Rowbury had already given birth and returned to competition.

But Rowbury, a Nike athlete, said she never lost pay during her pregnancy and subsequent comeback.

“I was never reduced, I was never suspended,” she said, adding, “I did my best on my end to read very thoroughly through my contract and try to be the best representative of the company that I could be and fulfill my contract as much as possible.”