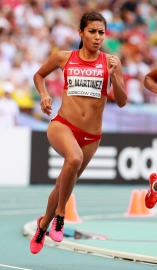 At the 2009 NCAA Outdoor Championships, Brenda was 1500 meter runner-up. Martinez, who was a 3-time NCAA All-American for UC Riverside, works with legendary coach Joe Vigil.

FUN FACT: In the summer, Brenda gives back "in abundance" and hosts a running camp for local girls at Big Bear Lake, California.

By Kevin Contreras, The Highlander

Brenda Martinez was one of UC Riverside’s most prominent and outstanding athletes in its track & field history. Martinez graduated from UCR with a...

"That feeling of not feeling sorry for yourself is something they’ve instilled in me from a young age."

Brenda Martinez is speedy on the track, but drives 'like an old lady'. The USA middle distance star and 2016 Rio Olympian shares some of her best bits of advice for on and off the...

Brenda Martinez giving back in abundance

For the fifth year, the 2016 Olympian aims to inspire high school runners at a summer camp she hosts in Big Bear, California: “I appreciate my life more because of them.”

It was a phone call with her famed coach, Joe Vigil, that sparked the idea....

“You are a shining example of what our community represents; you — and your parents — are to be commended for your contributions and reaching for your dreams.”

Brenda Martinez driven to be a role model

"There’s more to life than just running. I’m starting to realize that more as I get older. Kids are looking up to me."

By Allan Steele, The Press Enterprise

"Ever since then we reached out to Dr. Vigil, and him just giving us a hand, we didn't take it for granted, and it just changed everything in how we view things."

You call Carlos Handler in the middle of the afternoon. He's happy to talk -- but he and his...

Martinez puts 800 crash behind her, turns focus to 1500 at U.S. Olympic Trials

“I’m not putting the blame on anyone. That’s how track is. We move on... I’m ready to bounce back.”

EUGENE, Ore. – By the time Brenda Martinez sat down alone with a turkey sandwich and her four dogs Monday night in the house she and her husband/coach...

Sub-4:20 Miler Brenda Martinez Has Big Goals for the Carlsbad 5000

“If I’m there in the final Mile or even the final quarter than I will be really excited."

It’s a given that runners—no matter their ability or age–have to be tough. Let’s face it: this beloved sport of ours is a demanding one that requires Herculean...

Martinez Unafraid to ‘Go After It’

"Going after it” means taking risks, accepting the possibility of failure to see how great a success is possible.

The 2013 season, in which she won bronze at 800m at the IAAF World Championships, made Brenda Martinez the most successful U.S. woman at that distance in...

Brenda Martinez Making Strides On & Off the Track

Every runner has them and that includes the thousands taking to the streets on Sunday morning for the Carlsbad 5000.

That even goes for...

At the 2003 IAAF World Championships in Paris, the United States put in a dismal performance in the middle distance events. With the Stade de France...

By Erin Strout for Running Times

A royal blue velvet box sits unassumingly on the coffee table. It's about the size of a postcard, and it's no different...

Under the intense pressure of SPIKES’ super quick interview, we find out that the USA’s world 800m bronze medallist Brenda Martinez loves Amy Winehouse; could have been a police officer; and really fancies...

Martinez giving back to running community

DEVORE, Calif. — Brenda Martinez didn’t need her track shoes for a workout on Saturday. Instead, her workout consisted of signing...

Brenda Martinez may be a bright new star in the world of elite middle-distance racing, but she hasn’t let that get in the way of...

2013 will forever be the year that Martinez’ potential blossomed into track and field prominence.

Brenda Martinez was tired. The Big Bear resident, fresh off a bronze medal finish at the World Track & Field Championships, decided to call it a season and take...

"Athletics saved my life.”; "I belong here and know I can run with these girls."

If you wanted to create a textbook to give to parents about why their kids should take up athletics, then pay attention to the story of Brenda Martinez.

From “humble beginnings” in the...

I just thought "I have to bleed for coach [Joe Vigil]. Just give it everything you have to the line, just don’t give up."

Brenda Martinez of Rancho Cucamonga on Sunday became the first American woman to win a medal in the 800 at the outdoor World Track & Field Championships, using a late kick to finish...

Brenda Martinez has been coached by phone or email to become one of the best in the world in 800. Now she has a chance to win the first World Championship medal for a U.S. woman in the event.

Brenda Martinez wasn't ready to give up her running career after...

MONACO – Reigning world champion Jenny Simpson of the U.S., who last year finished dead last in her semifinal heat of the Olympics, is officially back. She’s not just back,...

Brenda Martinez Getting on the Right Track

Former UC Riverside star who will compete at the USA Championships is blossoming into a force as a professional; working with renowned coach Joe Vigil

Brenda Martinez admits she was overwhelmed at all the decisions she had to make coming out of UC...

Five Riverside and San Bernardino County girls to be part of inaugural camp June 28-30 hosted by top U.S. Miler; "giving back in abundance"

Welcome back to 5 Questions, where we will pick the brains of people from all areas of the running scene. Today, we were lucky enough to catch up with Brenda Martinez. Follow Brenda on Twitter @bmartrun and check out her website for more information on her whereabouts...

By Allan Steele, The Press-Enterprise

Martinez set a personal best and a meet record at the storied Mt. SAC Relays on...

BOSTON – (April 14, 2013) – A chilly wind blew through Back Bay here this morning, but did little to deter Nick Willis and Brenda Martinez from winning their first B.A.A. Invitational Miles with powerful kick finishes. Their times were modest, 4:03.3 and...

4 Minutes with a Miler: Brenda Martinez

Bring Back the Mile’s podcast series, 4 Minutes with a Miler, sits down with 2012 U.S. Open Mile Champion and 4:32.29 Miler, Brenda Martinez, coached by the legendary Joe Vigil. A UC Riverside grad, Martinez is a three-time NCAA All-American. The interview is hosted by Duncan Larkin with the...