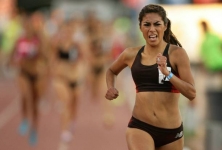 By Allan Steele, The Press-Enterprise

Martinez set a personal best and a meet record at the storied Mt. SAC Relays on Friday night, clocking 4 minutes, 4.86 seconds in the 1500 meters. Just as she did during her days as a Highlander, Martinez ran out front early and didn’t let up. She increased her lead every lap before collapsing at the finish line. The time was the fastest in the world this year and bested her PR by two seconds.

“The only thing I was worried about was racing the clock,” Martinez said. “I know I did the work … rely on the training you put in and believe in it.”

This was far from a collegiate race. Martinez has been establishing herself at the pro level over the past three seasons. Last year she dominated the Mile, winning the Falmouth Mile, the U.S. Open Mile at Madison Square Garden, England’s Great City Games Mile, and the Fifth Avenue Mile in New York.