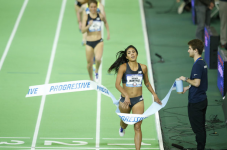 The prevailing sentiment of the USA Indoor Track & Field Championships was that of a shrug.

Athletes who didn't perform their best had a built-in, and not untrue, explanation: All that matters is preparing to qualify for this summer's Rio Olympics.

For those who did, celebrations often were muted. Qualifiers face a quick turnaround for next weekend's IAAF world indoor championships, which begin Thursday.

But Brenda Martinez and Cory McGee, the winner and runner-up of the 1500 meters at Saturday's USA Indoor Track & Field Championships?

"I'm on top of the world right now," McGee said after finishing second in 4 minutes, 9.97 seconds to secure her second world championships appearance for Team USA. "I like to win, but this is the happiest I've ever been being second."