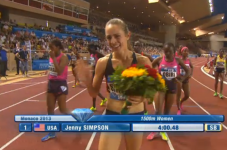 MONACO – Reigning world champion Jenny Simpson of the U.S., who last year finished dead last in her semifinal heat of the Olympics, is officially back. She’s not just back, she’s better than ever.

Tonight, Simpson, 26, showed in Monaco that she’s definitely a big time medal threat for the upcoming Moscow World Championships as she earned her first ever Diamond League victory. Ahead at the bell, Simpson gave up the lead on the back-stretch to 2012 World Indoor 3000 champion Hellen Obiri of Kenya, who just won the Kenyan champs last week, but Simpson rallied in the final 100 to dispatch Obiri. Simpson’s last lap was a stellar 59.30 and her final time was 4:00.48 – the second best time of Simpson’s career (her personal record is 3:59.90).

Obiri ended up second in 4:00.93, as she was just able to hold off a fast closing Brenda Martinez of the U.S. who ran a big PR of 4:00.94 (previous PR 4:04.86) to finish third. Americans also took fourth and fifth as this race was one for the ages for American fans as the U.S. took four of the top five spots.