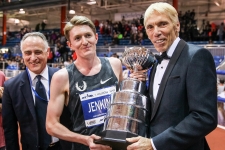 “I am very excited to come to New York and defend my NYRR Wanamaker Mile title. There’s no place like The Armory when it comes to racing. The energy from the crowd is on a whole other level and winning there is something I plan to keep doing,” Eric Jenkins said.

Jenkins, 26, of Portland, OR, won the NYRR Wanamaker Mile last year in a last-lap sprint against Olympic 800 meter bronze medalist Clayton Murphy. The 2017 World Championship team member also narrowly defeated Olympic 1500m champion Matthew Centrowitz at the 2016 New Balance 5th Avenue Mile, winning by one-tenth of a second in 3:49.4, the fastest time ever by an American at the event.

Martinez, 30, of Big Bear, CA, was a Rio 2016 Olympian who made her third consecutive IAAF World Championship team in the 800 meters last summer. In her World Championship debut in 2013, she became the first American woman in event history to medal in the 800 meters, and the year prior won the 5th Avenue Mile in New York, outlasting a field that included seven Olympians.

Vaughn, 31, of Boulder, CO, made her first World Championship team last summer after finishing third over 1500 meters at the USA Championships. She is a two-time U.S. Olympic Trials qualifier who has also competed for Team USA at the World Indoor Championships and earned All-American honors while racing for the University of Colorado-Boulder.

The NYRR Millrose Games will highlight the year-round partnership between The Armory Foundation, which oversees the premier indoor track & field center in America, and New York Road Runners, the world’s premiere community running organization. NYRR has been the title sponsor of the NYRR Millrose Games since 2014, and for the third consecutive year the next generation of stars will share the same track as Olympians at the event. Media can apply for credentials to cover the NYRR Millrose Games by filling out the respective form here before 12:00pm ET on Sunday, January 28. Tickets to the NYRR Millrose Games are available for purchase here.

For the complete Wanamaker Mile field listing go to: nyrr.org/media-center/