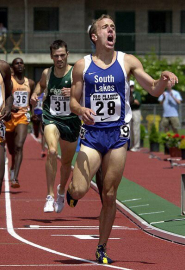 Alan was also the fourth U.S. high school athlete to break 4 minutes in the Mile and the first prep sub-4 indoors when he clocked 3:59.86 at the New Balance Games in New York City on January 20, 2001, and later in the year, at the Prefontaine Classic on May 27, he made history again, racing to a stellar 3:53.43 and breaking Jim Ryun's 36-year-old national high school Mile record.

In 2018, Alan Webb was fittingly one of 30 athletes inducted into the National High School Track & Field Hall of Fame, inaugural class.

FUN FACT: Alan was a competitive swimmer before becoming a world class Miler, and when he retired from professional running, he tried his hand as a triathlete but a cycling accident forced him to retire.

Olympian and U.S. Mile record holder takes aim at Grandma's Marathon, fresh off a 1:13 half-marathon after using pandemic time to redefine his physique.

Alan Webb: The Finish Line is a Magnet

“There should be a purpose for everything you do in training.”

Steve Magness and I recently interviewed American Mile great Alan Webb for the On Coaching Podcast. Alan offers amazing insight in this 90-minute tour de force about his training leading...

"No, I've done more than asked my entire career. Today, I simply want to do enough. I'll run 29-flat and call it good."

In the fall of 2013, Alan Webb asked me to coach him. Honestly, he didn't so much ask as he was desperate and had few other...

The Summer of Webb: An Inside Look at Alan Webb’s Magical 2007 Season

“I had a genuine confidence that I could compete with anybody in the world. And that was a feeling that I’d never had before… I had tasted it before, but that solidified it.”

Matthew Centrowitz still remembers it clearly. It was June 2, 2007, and he was at the...

“We were in the running industry for so long, that was really all we were. That’s where all our value was, and I think it’s cool we’re able to take the skills we learned there — the hard work, the discipline, the drive — and transfer them over to a different industry.”

"Look at not just Matt, but so many other Americans and how far distance running has come in the last ten years. I hope I've played a small part in that."

FALMOUTH, Mass. — To mark the return of the elite Mile to Falmouth after a one-year hiatus, “Bannister: Everest on the Track", will be screened at the New Balance Falmouth Road Race’s...

It is a sign of how well track & field is doing in general, especially in the United States. I'm happy to see that progression happening.

After representing the block M with pride while they competed for the Maize and Blue, our student-athlete alumni have gone off to become...

HOKA ONE ONE presents the Mile Moment of the Month

Until January 20, 2001, no prep athlete, including teen phenom Jim Ryun, had broken 4 minutes for the Mile indoors. At the 2001 New Balance Games in New York City, the newest U.S. teen Mile star Alan Webb from Reston,...

Alan Webb Reinvents Himself as a Triathlete

“I’m not the runner that I was, but I still have this opportunity for however long.”

BEAVERTON, Ore. — Alan Webb arrived at Portland International Airport last month and prepared to present his passport. He was scheduled to fly from Oregon to Denver to...

For four decades the Prefontaine Classic has been bringing the best track & field athletes in the world to Hayward Field for one...

The Unsung Glory of the Mile Run

By Svati Kirsten Narula, The Atlantic

In 2001, Alan Webb was a senior at South Lakes High School in Reston, Virginia. He was also a distance runner who'd been winning races and breaking records since his...

U.S. Mile record holder ran his last competitive Mile on the track where it all began in 2001.

Saturday was an emotional day for the U.S. Mile record holder and 2004 Olympian Alan Webb, who closed out his final track competition with an 11th place finish in...

“I gave it everything that I had … in every way. Trying to do the best I could with what I was given. That’s what I was always trying to do. Every move that I made, every workout that I ran, I was trying to get the best out of myself. That was the common denominator. Even though I didn’t do as...

An excerpt from the Webb family's personal blog on Alan's last Track & Field race at the 2014 Millrose Games Wanamaker Mile.

In just a few short days, it’s hard for me to believe Alan will be boarding a plane to compete at what could be his last elite level race in the Mile. New...

Alan Webb’s fabled track career may be nearing its finish, with his final race potentially coming as soon as February 15. After that, he might be reincarnated as a triathlete.

When almost 20,000 runners fill the streets for a stretch of almost eight hours, it can be easy to run in relative anonymity, if...

"I like being around the positive energy and the enthusiasm of young guys who want to do well and want to get better," said Webb.

It's not clear how good the Portland State cross country teams will be this year, but there isn't a Division I program with more star...

"I’m just trying to keep things low-key, [and] didn’t feel it was necessary to make a big deal about anything,” explains U.S. Mile record holder Alan Webb in a Flotrack interview. Which is...

In a 15 minute sit down with Alan Webb, Flotrack talks to the American record holder in the mile about where he's at. He just made some big changes moving back to Portland, Oregon after the birth of his daughter while making another coaching change. Alan gives reasons...

Alan Webb on the Marathon and Other Matters

The Next Chapter: Alan Webb

As Alan Webb drove into the teeth of a North Dakota rainstorm last Wednesday night, the U.S. record holder in the Mile was looking forward to new horizons on his latest trek west.

Webb is a new father and has set his sights on new goals. For more than a decade he...

Alan Webb Is Moving, But Where?

Is American Mile record holder Alan Webb going to end up in Portland, Oregon? Piecing together what information we do we have -- we haven't gotten responses from Webb or from his agent Ray Flynn, but will update if we do -- the answer is looking more and more...

When Jenny Simpson won the 1500 meter race at the World Championships last year, even she looked surprised. She’d surged from the back of the pack with one lap left and became the first American woman since 1983 to take the “metric Mile” title. She’ll be racing in London as...

Alan Webb, who broke the four-minute-mile barrier in high school, failed to qualify for this year’s Olympics.

Alan Webb caught himself looking at a list not long ago. It was a list of Americans who had run four-minute miles, and he noticed that it...

"If I had anything to do with that... maybe I inspired everybody too much, maybe I created a monster...''

EUGENE, Ore. - It has been all the talk for nearly a decade now, that middle- and long-distance running in the United States has been resurrected from...

The Return of Alan Webb

On January 6, 2012, Alan Webb returned to the Armory, a brick bastion of a facility in Upper Manhattan where, almost 11 years earlier, he became the first high schooler since 1967 to break 4:00 in the Mile, and the first ever to do so indoors. This race was...

EUGENE, Ore. -- They were the lab rats. Test cases for the digital world that lay ahead and now greets every runner who shows a hint of promise, subjecting them to the scrutiny that comes with being fast young. It was the spring of 2001 and two runners born 14...

Another race and another disappointing finish. Alan Webb’s legs didn’t move as fast as they should have, and afterward, his explanation struggled to find a rhythm, as well.

By Walt Murphy, Walt Murphy's News & Results Service
(c) Copyright 2012-all rights reserved. May not be reprinted or retransmitted without permission.

PALO ALTO - His career stalled by injuries most of the past four years, Alan Webb hopes to become the runner he once was. But he doesn't expect to get there by looking back.

A nervous excitement spread through the spectators and it immediately felt as if we were doing this together, willing Alan around the track.

Every sports fan has their IT moment. The day “IT” happened. Your grandfather remembers “IT” and your dad remembers “THAT”,...

"It's great to write and read about these young guys now, but if you want to read about them in five or six years, my advice would be: Treat them gently."- coach Mark Wetmore

Two high school runners. One is a pure Miler named Jim Ryun, a slender junior from...

ARCADIA, Calif. - At the Arcadia Invitational on Saturday, Alan Webb was the talk of the meet, before and after, as the senior from Reston, Va. who last January...

Alan Webb, 18, became the first American high school athlete to run under 4 minutes for the indoor Mile on Saturday. Webb's time of 3...