The Summer of Webb: An Inside Look at Alan Webb’s Magical 2007 Season 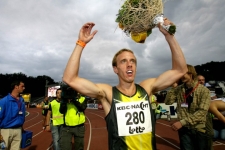 “I had a genuine confidence that I could compete with anybody in the world. And that was a feeling that I’d never had before… I had tasted it before, but that solidified it.”

Matthew Centrowitz still remembers it clearly. It was June 2, 2007, and he was at the Reebok Grand Prix on Randall’s Island in New York City. He may have an Olympic gold medal now, but back then Centrowitz was an 18-year-old senior at Broadneck (Md.) High School running in his first Mile against professionals, where he would face the greatest field of his young life: Nick Willis, Craig Mottram, Bernard Lagat, Kevin Sullivan and the headliner, Alan Webb.

Centrowitz arrived a couple of hours before his race on a warm, muggy night at Icahn Stadium. As he and his training partner, Dan Wilson, headed for the warmup area, Wilson spotted Webb seated on a hill nearby. Wilson, a 2002 UConn grad and three-time U.S. finalist at 1500 meters, knew Webb from his years on the circuit and made a beeline toward him. Centrowitz followed along and remained quiet as the two pros talked shop.

Wilson asked Webb if he was in shape. The answer to this was already fairly obvious — Webb had run 3:51.71 for the Mile in his last race at the Drake Relays. But even if they’re in monster shape, pros generally don’t admit it to other pros. Better to downplay expectations and let your opponent underestimate you.

That wasn’t Webb’s style. Webb thrived on confidence, so when Wilson asked him if he was in shape, Webb responded truthfully.