"It's great to write and read about these young guys now, but if you want to read about them in five or six years, my advice would be: Treat them gently."- coach Mark Wetmore

Two high school runners. One is a pure Miler named Jim Ryun, a slender junior from Wichita, Kan. He's graceful and fast and can churn out killing 400 meter repeats until the sun drops past the flat, distant horizon. The other is a pale waif named Gerry Lindgren, a tiny senior from Spokane. He's frail and geeky, from his spindly legs to his nerdy eyeglasses, yet he has an uncanny capacity for running far in pain. It's 1964, and that year Ryun and Lindgren write the greatest chapter in the history of American high school distance running.

Ryun becomes the first high school runner to break 4 minutes for the Mile and wins a spot on the U.S. Olympic team at age 17. A year later he runs four more sub-4s, including a 3:55.3 that beats New Zealand's Peter Snell at the AAU championships in San Diego, eight months after Snell wins the Olympic 1500 meter gold medal. Lindgren is even more spectacular. He runs 4:01.5 for the Mile and 13:44.0 for 5000 meters, only nine seconds off the world record. Better the longer the race, Lindgren finishes first in the U.S. Olympic Trials at 10,000 meters and wins the same event at a politically charged U.S.-U.S.S.R. dual meet in front of more than 50,000 spectators at the Los Angeles Memorial Coliseum. 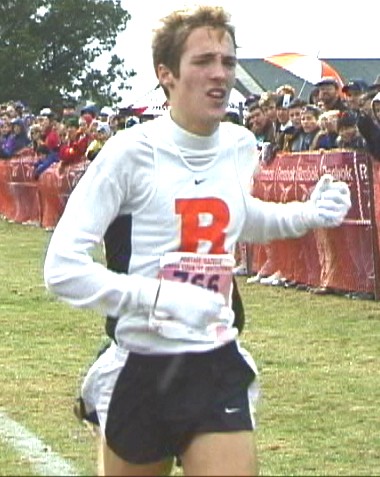 The two runners, one fast, the other tireless, are just the beginning. Generations of young Americans will follow, training hard, running fast and beating the world. Won't they?

Change is in the air.
Two high school runners. One is a pure Miler named Alan Webb, a muscular senior from Reston, Va. He's strong and fast, with an insatiable appetite for swift training and a gift for stretching his speed over the four laps of his chosen race. The other is a pale waif named Dathan Ritzenhein (left), a willowy senior from Rockford, Mich. He has an elfin build and a fearsome ability to run for miles at the edge of collapse. The year is 2001, and these two young runners are linked across generations to Ryun and Lindgren. "They are," says 30-year-old Bob Kennedy, the U.S.-record holder for 5000 meters, "the best two high school runners to come along together in a long time."