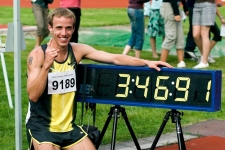 Watch the race below to see this piece of American Distance Running history that was captured by Flotrack in Brasschaat.