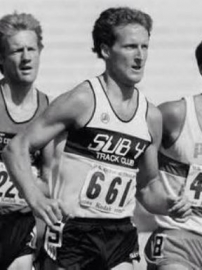 The holder of eight Mile times under 3:50 was the USA 1500 meter champion six times as well as the USA Indoor Mile champion four times.

In 1999, he was selected as the first Head Cross Country and Track & Field coach at Cal State San Marcos in California; Scott retired at the end of the 2018 track season.

Steve Scott One-Upped Himself at 1978 NCAAs

Steve Scott had no chance to win a fourth-straight NCAA Division II Mile / 1500 meter title in 1978.

That’s because his school, UC Irvine, had moved up to Division I.

Catching up with Steve Scott: Master of the Sub-4 Mile

"I believe one of the keys to my later success was that I wasn't pushed in high school."

Steve Scott is America's greatest Miler. Not the fastest anymore, but the greatest.

Consider that in his running career, which didn't really take off until he was a...

Advice to young runners gleaned from his coaching years includes patience, relaxation and trusting in your coach.

There have been athletes from 71 countries running faster than 4 minutes for the Mile since Roger Bannister first broke the historic barrier on May...

Retired CSU-San Marcos coach has moved with wife JoAnn to Pacific Grove, near Monterey, where he continues to run and enjoys the cooler conditions while he ponders his future.

By Nick Canepa for the San Diego Union-Tribune

It was a February night in 1977, when we really, honestly cared about...

This is Part 1 of a 2 part series.  Part 1 looks into Steve Scott’s training during the later stages of his career. By this stage, Steve had already amassed...

Learn to race the competition, not the clock.

Steve Scott started out as a basebal player. His mom got Steve into running, encouraging him to join her morning jogs. In high school, the future U.S. Olympian ran 1:52 for the 800 meters and 4:15 for the Mile in...

"If I can expose them to running and show them that it’s fun, then to me that’s rewarding."

Had a chance to catch up with Steve Scott last week. Scott obviously is one of the greatest runners in American history. The three-time Olympian attended college at...

The man, the myth, the legend: Steve Scott

Scott’s perseverance and dedication to the sport of running has helped athletes at CSUSM meet their full potential. This year, he is looking forward to taking his track & field team to the California Collegiate Athletic Association (CCAA) Championships held at Cal State Los Angeles in May.

No matter how many people run under 4 minutes, when you do it your first time it’s something special.

In the United States, when the conversation is track and field, specifically the Mile, one name stands out.

A Mile is four laps on the track that some have called the perfect distance and a four-act play. Oslo's Bislett Games Dream Mile in the 1980s was the pinnacle of this classic...

The magic of the Mile apparently will never go away, and some coaches and runners want the 1600 to change back to the Mile, which is slightly longer.

In his career, Steve Scott ran a record 137 sub-4 minute Miles. Chances are, no one will ever break that mark...

Steve Scott stands at the starting line on the track at the University of Oregon's Hayward Field, in Eugene, on May 26, 1996. He has 4 minutes to prove to himself that he is immortal....

Miles to Go Before They Sleep…

...and a promise to keep in Cleveland. Eamonn Coghlan and Steve Scott raced in San Diego, then flew all night to meet again

As a freshman member of the Upland, Calif. high school track team, Steve Scott savored the pleasures of life in the slow lane. “I didn’t...

''It's the best Mile the world's ever seen." - Steve Ovett

OSLO, Norway — The Mile moved to a new frontier tonight when seven runners shattered 3 minutes, 51 seconds, led by Steve Ovett's winning 3:49.25 and an American record 3:49.68 by Steve Scott, who was...

As We Join Our Show, Steve, Is, As Usual, Running

Can young Steve Scott, Miler and soap opera junkie, find happiness and success with a world record? You can bet he'd like to find out

Call it the Seven-Per-Cent Problem. A Miler running at 15 mph—or 4 minutes per Mile—spends a tenth of his energy just...