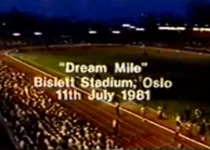 ''It's the best Mile the world's ever seen." - Steve Ovett

OSLO, Norway — The Mile moved to a new frontier tonight when seven runners shattered 3 minutes, 51 seconds, led by Steve Ovett's winning 3:49.25 and an American record 3:49.68 by Steve Scott, who was third, in the Dream Mile.

On a warm, pleasant evening on which Sebastian Coe of Britain broke his world record in the 1000 meters with a time of 2 minutes, 12.18 seconds and Edwin Moses won his 65th consecutive race in the 400 meter hurdles (47.99 seconds), Bislett Stadium reaffirmed its place as ''the world record track'' during the Dulux Games.

There was no world record in the Mile; Ovett set the mark here last year in 3:48.8. But tonight's race, before an enthusiastic crowd of 12,822, will be talked about alongside such Mile races as Roger Bannister's first sub-4 minute performance; the Bannister-John Landy duel, and Marty Liquori's 1971 ''Dream Mile'' victory over Jim Ryun.

In most previous sub-3:50 performances, the race was confined to a single runner's pursuing a world record, with most challengers far behind. Tonight's race proved that Milers are now prepared to compete at the 3:50 level.

''It's the best Mile the world's ever seen,'' said the normally cautious Ovett, the 1980 Olympic 800 meter champion from Britain, who outkicked 10 rivals on a last lap that saw the first three runners under 3:50 and the next four no more than 12 yards behind.