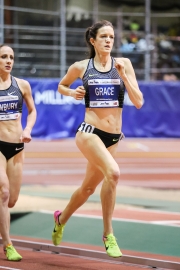 
Kate Grace finished runner-up in the 1500 meters, running 4:03.54 at the 2021 Track Meet in Irvine, California. In early July in Oslo, she won her first Diamond League race, setting a 800m personal record of 1:57.60 and beating the reigning world champion Halimah Nakaayi, and eight days later, set another 800 PR in 1:57.20 to finish third at the Herculis Meet in Monaco. On July 13 at the Diamond League meet in Gateshead, Kate won the Millicent Fawcett Mile in a world leading 4:27.20. She closed her racing campaign with a 1500m win and personal record of 4:01.33 at the ISTAF Berlin meet.

"It’s just more time for Jerry and I to get to know each other and for us to work together so that it’s training in his system but he’s continuing to train me to be the best athlete that I can. And I’m optimistic about that.”

Inspiring Her Daughter, an Olympic Runner, Was No Sweat for a Fitness Guru

“Even if I didn’t envision this path, I always had coaches telling me, ‘You can do this in college; you can even do this after. My mom had cheerleading available in high school; she is fitter than most of us, but of course she wasn’t told that. But I was told it, and I believed it.”

Rio Olympic hopeful Kate Grace is faster than ever

“I have to go all in. I have to be unapologetic about having goals and wanting them."

Four years ago we might not have been professional athletes, but we had all the aspirations in the world — some larger than others of course. One summer at Yale, Kate...

Running in the Family: Kate Grace

Mother Kathy Smith, fitness icon, "has been the ultimate role model for my track career.”

By SPIKES powered by IAAF

Kate Grace is the 2013 USA Road Mile champion and a World Relays 4x1500m silver medalist, but she's still only the second most famous person in her family. Her mother, Kathy...

Oiselle star looks to take another big step forward in 2014

The definition of a breakout season just so happened to be Kate Grace's 2013 track season. The Oiselle-sponsored middle distance runner set PRs in the 800m, 1500m, Mile and won the USA 1 Mile Road...

Watch Kate Grace run a few laps around a track and you will immediately conclude that she has a fitting last name.

A four-time NCAA All-American while at Yale, Grace has been...

What a season it's already been for middle distance standout Kate Grace. The former Yale All-American, and current NJ-NY Track Club athlete, is taking her talent to a new level in 2013, running U.S. top three times in the 1500m and Mile during the indoor season. Under...

A Beautiful Night for the Mile: Reid, Lomong Win the Wanamaker Mile

Multiple records topple in the Armory Saturday night as high school phenom Mary Cain betters her own U.S. record, while Lomong and O’Hare take the storied race into new terrain.

NEW YORK – Under the bright lights and amidst the roaring of a sold-out crowd at the...