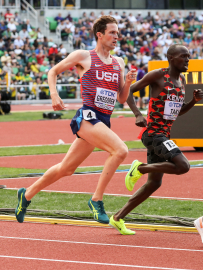 Gregorek had a breakthrough year in 2017 as he qualified for his first international team at the USATF Outdoor Championships when he unleashed a monster kick to move from 10th place to place third for the final qualifying Team USA spot, recording 3:43.99. In his build-up to the IAAF World Championships, Johnny won the Tracktown 1500m in 3:35.00 on July 6 to set a personal record, showing he was ready to compete at the highest level. In the London World Championships men’s 1500m final, Gregorek, the only American, finished 10th in 3:37.56.

Before going pro, Johnny had a successful collegiate career at Columbia University and after completing his undergraduate degree, competed for two seasons with the Oregon Ducks. At the 2014 NCAA Indoor Championships, he placed 6th in the Mile with a time of 4:04.36, earning first team All-American.

FUN FACT I: Gregorek was his high school class valedictorian and also an Eagle Scout.

FUN FACT II: At 6'5", he is one of the tallest world class Milers all-time.

FUN FACT III: On December 19, 2015 at Boston University, Johnny recorded the first indoor sub-4 minute Mile ever run in the month of December with his 3:58.15.

“I believe I can make the Olympics team and I know I can compete on that stage, but I’m approaching it with a more healthy, broad mindset of I just want to be the best runner I can be.”

Thirteen months ago, Johnny Gregorek was still reveling in arguably the...

"Running is woven into everything in my life. It stabilizes everything else... You learn so much that you pull into your personal life about staying calm and happy and living each moment, being there and being present.”

Running is a sport of contrasts and...

STANFORD, Calif. - On Sunday, June 30 at Cobb Track & Angell Field, the world’s best Milers will bring their rivalry to the Prefontaine Classic for the meet’s...

From a 4:15 HS Mile to sub-3:50 at age 27: "Coach Gags reached out and gave me an opportunity and ASICS was generous enough to sponsor me."

“I shocked myself pretty bad with that one,” says Johnny Gregorek, who scared the indoor U.S. Mile record with his...

When I ran faster and did the 3:53 and my dad & I had the fastest combined Mile time was way more exciting & dramatic than my first sub-4 which was sort of lackluster.

Johnny Gregorek was a member of the 2017 World Championships team and finished in 10th place with a time of...

Breaking 4 minutes, as well as lowering my PR to become the fastest duo along with my father, was a great feeling.

For 10 days beginning on Aug. 4, some of the best athletes in the world will be competing in London at the IAAF World Track & Field Championships....

Gregoreks pass Keinos, now #1 combo: “When we found out we got the fastest combination we were kind of laughing about it—it’s a fun bragging rights thing.”

To-date, only eight father / son combos have broken 4 minutes for the storied distance

A Day of Mile Magic across America

This past Saturday, February 14, 2015 was, in totality, one of the greatest days in Mile history, particularly indoors. Consider the following in a day of Mile...