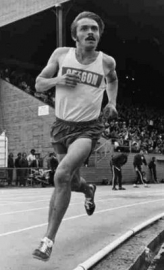 
Steve Prefontaine, “Pre”, was one of the most charismatic, talented runners ever and a top Miler too with a 3:54.6 personal record – the 9th fastest performer at the time (tie with Marty Liquori) – set at an exciting, highly anticipated 1973 Hayward Field race won by fellow 1972 U.S. Olympian Dave Wottle.

Pre, who fought hard for athletes’ rights, tragically died in a car accident, at age 24, on May 30, 1975 in Eugene, Oregon. Since his untimely death, the annual Prefontaine Classic track meet has been held in Eugene, and thousands of fans have also made a pilgrimage to pay respects at Pre’s Rock above Hayward Field.

FUN FACT: In 1973, Pre was the first track athlete that the nascent shoe company called Nike signed to a contract.

FUN FACT II: Pre had a 35-3 overall record at Oregon’s storied Hayward Field with all three defeats in the Mile.

“Pre was a rebel from a working-class background, a guy full of cockiness and guts,” said Nike co-founder Phil Knight. “Pre’s spirit is the cornerstone of this company’s soul.”

In 1973, two years after the Nike brand was born and the first Swoosh adorned shoes, the nascent...

For them, Pre ran his workout Mile in 3:58.3 and coughed blood at the end. And then, his lungs gravely wounded, he found a bullhorn and thanked the people for their support.

By Jeff Johnson for Competitor

Although Steve Prefontaine continues to be widely remembered, idolized and celebrated 40...

For four decades the Prefontaine Classic has been bringing the best track & field athletes in the world to Hayward Field for one...

He wasn’t always the fastest. Nor was he the most decorated. So four decades after his death, why is Steve Prefontaine still the most influential American runner ever?

The grandstand at Marshfield High School is nearly empty, but it seems like everyone in Coos...

At their first goal-setting session, Prefontaine announced to Bowerman that it was great that Bill was the finest coach of Milers, because that was the race he wanted to ultimately rule. Bowerman asked how fast he hoped to run. Pre said, “3:48.”