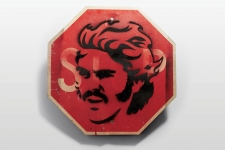 He wasn’t always the fastest. Nor was he the most decorated. So four decades after his death, why is Steve Prefontaine still the most influential American runner ever?

The grandstand at Marshfield High School is nearly empty, but it seems like everyone in Coos Bay, Oregon, is on the track. People are crossing the finish line in every way possible—the buzz-cut high school kids out in front, the stoic folks wearing earbuds, the willowy 9-year-olds accompanied by red-faced parents. Old-timers limp around the turn to huge applause. A handful of people propel themselves toward the finish line, unashamed of the spittle hanging from their lips and of their gasps and of having run themselves ugly. And then there’s me up in the grandstand in my jeans and my Chuck Taylors and my different kind of ugliness.

Last night, driving down from Portland for the Prefontaine Memorial Run, I almost convinced myself that I was still a runner. As I swept past the dunes and onto the Coos Bay Bridge, I gave it one last college try: If you’re seriously going to look for him, was my logic, you’ve got to get yourself on that starting line. The opening bars of “Born to Run” were soaring out over the Pacific, and the idea of lacing up my old New Balances and chasing after his ghost no longer seemed like such a potentially stupid and / or painful idea. Maybe all this time off was exactly what I needed. Maybe it was like I’d been tapering for the past couple years. Maybe I even had a sub-40 in me.

Waking up in my motel this morning, however, the prospect of running a 10K on absolutely no training seemed about as relevant to my task as slaughtering a cow would to a food critic. Just the thought of pinning a number to my chest made me want to reach for the Advil.

And so, instead, I’m in the grandstand staring at all these people. Aside from his face stuck to a bunch of sweaty T-shirts and the occasional fake mustache, there is absolutely no sign of him. What the hell got into me last night? I can’t put it all on Bruce Springsteen and the late summer air. What an idea, to think that just because I’ve come to his hometown, Pre might actually appear. I’m at his memorial run, for goodness sake.

Maybe this is what happens when you sit in the grandstand. Maybe this is what you do when you’re a spectator, a fan of distance running—you end up judging everyone against someone who’s been gone for 38 years. What an idea, creeping around Coos Bay, hoping to uncover something that hasn’t already been looked for a million times over. Everything’s already been said about Steve Prefontaine—he said it all himself first, and we’ve just been repeating and repeating his words until they’ve hardened into one giant Nike slogan. If there’s any trace of him left, I don’t know where to find it.

Anyone who has fallen under his spell can recall it happening. This is my version. In the spring of 1994, I was 13, and my family had just moved to Oregon. My older brother and I were sports fans. Fans, in general, of anyone possessed by that unique, unsustainable intensity that we called “American.” Axl Rose. Bo Jackson. Ferris Bueller. Kurt Cobain. These had been our guys. But Axl started wearing spandex. Bo got hurt. Ferris wasn’t real. And Kurt’s body had just been found. So we were in the market for a new hero.

What I remember is that Mom was driving us home from our monthly ransacking of the Central Library. As usual, my brother had called shotgun. From where I was sitting, in the backseat, my brother’s life had taken an unexpected turn. He was becoming a jock. Okay—a half-jock. My brother and I had always been sports-crazy, but as much as we dreamed about playing quarterback or even backup point guard, those dreams were confined to our backyard. We simply didn’t have the size for those sports; our parents were maybe five-foot-four. And so, the previous fall, almost apologetically, my brother had gone out for the one team that never cuts anybody: cross-country. And here he was, eight months later, the fastest kid in the freshman class. Just like that, his life had gotten interesting. Now, in the car, he was bent over a beat-up little book, flipping through photographs of an undersized, liquid-eyed runner. And I was right behind him, clinging to the seatback, trying to read the captions over his shoulder.