I ran at Bowling Green State University, my little college out there on the edge of the prairie. It was 1990, I think, and we were piled into BGSU vans on the way to an off-campus run with head coach Sid Sink driving. The athlete in the front seat next to him was reading something about Steve Prefontaine, either a magazine article or Pre!, Tom Jordan’s biography of the man. (This was back before the internet opened up everyone’s ability to look up virtually anything, and figures from the past were not well known to 20-year-old guys.) The athlete was amazed at how good Prefontaine was, and asked Sink if he’d ever run against Pre. Sid glanced over and matter-of-factly said “that’s me right there”, one step ahead of Pre.

Sid was a contemporary of Prefontaine and raced against him on many occasions. Sid is a forgotten man now since his peak came at the wrong time, but at his peak he was very good: a four-time NCAA champion who broke the steeplechase American record and won a Pan American Games silver medal in 1971. In 1972 he had just completed his collegiate eligibility at BG and a sciatica flareup led to a terrible 9th place Olympic Trials finish in his preferred event, the steeple, but he gamely came back in the 5000 and very nearly made the team.

It was only at the end of Sid’s career that teammate Dave Wottle eclipsed his accomplishments. Two years his junior, Wottle won three NCAA titles in 1972, then followed it up with a surprise World Record at the Olympic Trials and a shocking come-from-behind gold medal victory in Munich. Wottle and his golf cap became legendary.

Pre and Wottle got to know each other during the ’72 Olympics, then roomed together at the ’73 AAU Championships in Bakersfield, California. “Pre’s personality was obviously a lot different than mine,” said Wottle. “We were like salt and pepper. I was a newlywed and he was a playboy, but we had a good time together.” So when Pre approached Wottle with the idea of making a Mile record attack at a one-off meet, Wottle was all ears.

The Hayward Field Restoration Meet was a hastily organized event in response to an unexpected calamity. Early in 1973, the city of Eugene’s fire marshall informed the University of Oregon that Hayward’s dilapidated west grandstand (the homestretch side) could no longer be used, that it would have to be torn down and replaced. Funding to make this happen was in short supply, as was time to get it done. Head coach Bill Bowerman said, “it was impossible to do justice to my coaching and to a big construction project at the same time,” and abruptly retired before the ’73 season to head up the project, leaving assistant Bill Dellinger to take over the track program.

Pledges were found to fund the new west grandstand construction but came up about $25,000 short. Someone—nobody seems to know who—came up with the idea of holding a track meet to bridge that gap. (How quaint: a track meet that makes money.) The hook to draw people in was Pre going head-to-head against Wottle in a Mile, a matchup of the two biggest names in U.S. middle-distance running at the time. Pre helped organize the race: “It shows his pull,” Wottle said. “He was able to put together a great field of competitors in about a two week period of time”.

Wottle says that Prefontaine approached him with an offer he couldn’t refuse: “Why don’t you come up to Eugene. We’ll go after the world record in the Mile and I’ll set the pace. I’ll bring you through in 2:56 and then each man for himself in the last lap.”

Below, local restaurant sign in Eugene, promoting the meet! 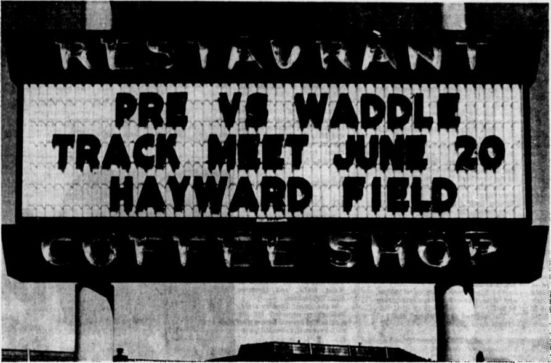