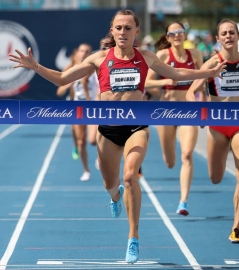 Also in 2019, Houlihan, showing her range and beating a deep American women's field, won the 2019 USA 10K Cross Country Championship crown in Tallahassee, FL, and later in February, she defended her USA Indoor 2 Mile title, running 9:31.38 and was runner-up in the USA Indoor Mile on Staten Island. At the USA Outdoor Championships in Des Moines, Shelby, an Iowa native, defended her 1500 title, beating Jenny Simpson, 4:03.18 to 4:03.41, and the next day, she also defended her 5000m title.

At the 2018 USA Outdoor Championships, Houlihan won her first outdoor 1500 meter national title with a strong closing kick, beating veteran and 4-time defending champion Jenny Simpson, 4:05.48 to 4:06.21. The next day, she took the USA 5000m title with a devastating final 100 meters.

Also in 2018, Houlihan defended her two indoor USA titles, again in Albuquerque, winning the 1500m & 3000m races in February to qualify for the World Indoor Championships. At the WIC in Birmingham, GBR, she finished 4th in the 1500m and 5th in the 3000m. In May at the Prefontaine Classic, Shelby defeated a top international field, clocking her first sub-4 metric Mile, 3:59.06, and in July, she won the Lausanne 1500m in another PR, 3:57.34. For her masterful year, Track & Field News selected Shelby as the U.S. Women's Athlete-of-the-Year and ranked her #1 in the world for the 1500m / Mile.

In 2017, Houlihan won the Mile at the BU Valentine Invitational in an indoor personal record, clocking 4 minutes, 24.16 seconds, and she capped-off an impressive indoor season in March, by becoming a double national champion, winning the USA Indoor Mile and 2 Mile titles on back-to-back nights in Albuquerque. At the USA Track & Field Championships, she won her first outdoor national title as a professional in the 5000 meters (15:13.87), besting fellow U.S. Olympians Shannon Rowbury and Molly Huddle to earn a Team USA berth for the London World Championships.

In her first professional outdoor track season, Shelby set a personal record 1500m time of 4:03.39 at the 2016 Prefontaine Classic, finishing 7th overall and 2nd American in a world class field. At the U.S. Olympic Trials, she qualified for the Rio Olympic Games in the 5000m and placed 11th in the Olympic 5000m later that summer. Following her Rio run, Shelby dropped down in distance to place 6th at the Fifth Avenue Mile, with a personal best Mile time of 4:23.0.

As a collegiate runner at Arizona State University, Shelby won the 2014 NCAA Outdoor Championship 1500m title in 4:18.10 and followed with a runner-up finish in the 1500m at the 2015 NCAAs. While competing for the Sun Devils, Shelby was a 12-time All-American and set school records for 800m, 1500m, Mile and 3000m. After graduating from ASU in 2015, Shelby joined the Bowerman Track Club to be coached by Jerry Schumacher.

"I want to try and get as many medals as possible: that gold Olympic medal; World Championship medals... I also have world records in my sights"... but "the more important thing for me is to enjoy the process and not to get too hung up on the end goals."

She intends to run both the 1500 and 5000 at the Olympic Trials next year even though the Tokyo Games schedule precludes serious consideration of racing both there.

“We become what we behold. We shape our tools and then our tools shape us.”

"I am grateful there is that opportunity even though it's delayed a little bit... As long as I stay healthy, not push too hard, there's no reason I can't be even better. It's another year to train if I look at it optimistically."

For about the past four...

When effort intersects with talent, the results can be spectacular.

Enter the world of Shelby Houlihan, who at age 26 is on the precipice of unprecedented success...

With major question marks against all the chief contenders, predicting the outcome of the women’s 1500m with any great level of confidence is a tricky business.

“I was definitely nervous coming into this race because I had a little more pressure than I usually feel."

It wasn’t until after the 1500 meter finals at the USATF Outdoor Championships that Webster City native Jenny Simpson finally caught up to Sioux City...

Shelby Houlihan and her fearsome kick have taken over U.S. track

Big goals for 2019 include U.S. record, defending USA titles and a medal at World Championships in Doha

BEAVERTON — Shelby Houlihan beat some of the best runners in the world in 2018 and crushed the U.S. record in the 5000 meters.

Queen of the Kick

By Cathal Dennehy for Spikes

It's the most feared weapon in middle-distance running, and now...

"I’ve looked up to her as a runner throughout high school. She’s been someone that has been talked about throughout Iowa. To come out here and race against her and put on a good show was really cool.”

If anything has characterized the 2018 track season thus far, it’s been the changing of the guard we’ve seen in many events, particularly in the sprints.

The aging Justin Gatlin and retired Usain Bolt have...

My diet has come a long way since high school and college. I really started from the bottom. I used to have no idea what was healthy.

Will Another Former Iowa Prep Win the NCAA 1500 Meter Title?

By Next Level People

Sioux City East and Arizona State standout Shelby Houlihan has made a significant statement during her sophomore season this year. She was an All-American in cross country with a 31st place finish in the fall. She won the Mile at the MPSF meet (Pac-12’s Indoor...