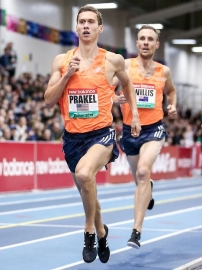 In 2019, the young rising U.S. star finished a close third at the New Balance 5th Avenue Mile, running 3:51.8, and in August, he was runner-up at the Sir Walter Miler in 3:54.90. In March at Boston University, Prakel produced a 3:50.94 Mile personal record (Top 10 U.S. indoor all-time) to finish third in the race where Yomif Kejelcha smashed the indoor world record with his 3:47.01 clocking.

A 5-time All-American at the University of Oregon, he finished 4th and 3rd in the Mile at the NCAA Indoor Championships in 2016 & 2018, respectively. Also, in 2016 at Oregon, he earned Academic All-American, First-Team honors.

YAKIMA, Wash. – For the third consecutive event, the Downtown Yakima Mile produced the fastest Mile on Washington soil. This time, Sam Prakel, who...

"Felt great to be able to close down the last 400, and finish with some confidence 4 weeks out from Trials."

Once again, Des Moines will host the USA Track & Field (USATF) 1 Mile Road Championships presented by Toyota, with some of the world's most elite runners competing for a...

Oregon Ducks senior Sam Prakel is all business, on the track and in the classroom

"I missed the big goal outdoors and that is something I'm still bummed about. Hopefully, I can make up for that this year."

EUGENE - Oregon senior Sam Prakel figures to be a contender in the Mile at the NCAA Indoor Track & Field Championships in two weeks in College...