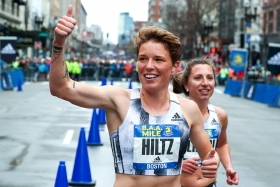 FUN FACT: Her given first name is Dominique.

“I’m definitely now very driven to just kind of do it all over again, make the Olympic team and then make the final of the Olympics."

What a difference a year can make. That’s true by the truckload when 2019 and ’20 are the benchmarks and Miler Nikki...

Nikki Hiltz looks back at and ahead of breakout season

Her chance to make the Tokyo Olympics is solid, but it’s Hiltz’s commitment to staying true to herself from now on that will lead her to the happiest finish lines.

“When my career is over and all said and done, I want to be remembered as more than just a good athlete. I believe this motivates me to run faster. The faster I run the more people I’m going to reach and the more lives I can potentially change.”

Nikki Hiltz sprints to 1500 gold at Pan Am Games

It turns out that Nikki Hiltz runs just as fast on international soil as she does at home.

Hiltz of Aptos cruised to victory in the 1500 meters at the Pan American Games in Lima, Peru, on...

“I think the crowd brought me home and it was a super close finish."

Nikki Hiltz made her first-ever trip to Boston to compete at the Boston Athletic Association Invitational Mile last Saturday and did what she’s been doing throughout her prestigious running...

“How you deal with the low days determines your success in this sport. It makes you who you are.”

Every runner knows that you stand on the podium alone, but getting there takes support. Nikki Hiltz aspires to stand there one day as a top-3 American Miler, but the...

BOSTON - The Boston Athletic Association (B.A.A.) has announced an elite field of world class competitors for the 2019 B.A.A. Invitational Mile, to be held on Saturday morning, April 13, two days before the 123rd...

Love on the Run

By Jon Gugala, Bring Back the Mile contributing writer

EDITOR'S NOTE: On June 3, junior Nikki Hiltz won the California State Meet at 1600 meters. Jon Gugala spoke to Hiltz shortly after who commented that "it was the best...