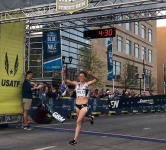 “When my career is over and all said and done, I want to be remembered as more than just a good athlete. I believe this motivates me to run faster. The faster I run the more people I’m going to reach and the more lives I can potentially change.”

Last year, when Arkansas alum Nikki Hiltz embarked upon a post-collegiate career with promising PRs of 2:05.16 and 4:09.14, immediate middle-distance stardom was not expected. But nobody told her that. This year, all the 24-year-old California native has done in her first full pro season is: win the USA road Mile title (her first national crown), improve her 800 best to 2:01.37, make Team USA’s World Championships squad by running a 1500 PR of 4:03.55 and capture the metric Mile gold at the recent Pan Am Games.

Early on, Hiltz distinguished herself as a talented and gritty performer. After a decorated career as a prep in Aptos, California, where she won a state title in the 1600, Hiltz went on to Oregon, where she was a member of the 2015 national championship team. After transferring to Arkansas later that year, she went on to earn 6 All-American honors as a Razorback, finishing 3rd in the NCAA indoor Mile as a senior and 2nd in the outdoor 1500s as a junior and a senior.

But 2019 has proved to be her breakout campaign. As a member of The Mission Athletics Club and guided by savvy Terrence Mahon, Hiltz has excelled. In the USATF 1500 she exhibited composure that belies her status as a professional novice. Closing hard over the final 300, bursting through traffic in the final homestretch, and nearly catching Jenny Simpson at the line, she finished 3rd in the biggest race of her young professional career. “My family was seated near the 1500m start line so I got an audible shot of energy with every lap,” says the adidas-sponsored Hiltz. “With 300m to go, I felt so good I knew I was going to make the team.”

Just a few weeks later, she found herself in Peru as the favorite in the Pan Am 1500m. “It definitely was a different feeling,” she notes. “Pretty much my whole career I’ve kind of been like an underdog and maybe overlooked some times.” Letting others lead nearly the entire race, she uncorked yet another strong finishing kick to capture the gold in 4:07.14, her fourth-fastest time ever. “With a lap to go I put myself behind the leader and just sat on her until the very last 100,” she explains. “And then I swung wide and just tried to get to the finish as fast as possible. It’s a new feeling having a target on my back. But I think I love it.”

Looking ahead to Doha, Hiltz has given thought about her upcoming global competition. “I’ve never been on a stage like that before,” she admits. “I’m really excited to feel the energy of an international crowd. Being an American wearing the singlet I feel like I’m going to have eyes on me. I would say my goal is to make the final.”