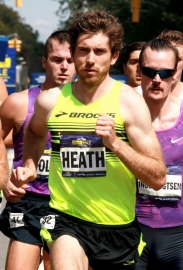 Under rainy conditions, Heath won his second USA 1 Mile Road title (4:09) at the 2015 Medtronic TC 1 Mile. In 2014, he finished second at the Ron Warhhurst Mile, posting a swift 3:53.61, and in September, Garrett was just edged by Jordan McNamara at the NYRR Fifth Avenue Mile, both timed in 3:51.0 (personal bests).

In 2013, he won the USA 1 Mile Road title at the Grand Blue Mile in Des Moines, clocking 4:02.79 for his first USA crown as well as the Great North CityGames road Mile in 4:01.56, an event record. Heath competed in the 1500m at the 2010 IAAF World Indoor Championships in Doha. At Stanford University, he was an 8-time NCAA All-American.

Garrett Heath grew up in Winona, a small town of about 30,000 people in southeastern...

The two-time USA Mile road champion has a striking physique, tall with a wide upper body frame – the exact opposite of most middle distance runners.

Steve Cram described Garrett Heath as a ‘surprise winner’ when he beat Mo Farah to first at the Great Edinburgh XC...

Life on the run is rewarding job for Garrett Heath

The Winona native has remained physically and financially healthy as a professional runner.

Garrett Heath’s life is anchored on insecurity. For the past five years, the Winona native has made a living as a professional runner, traveling across the country...

ST. PAUL, Minn. – A pair of Minnesotans are the favorites to win the USATF 1 Mile Road titles at the...

Many of the top middle distance runners in the United States are set to go head-to-head this Tuesday evening at the USA 1 Mile Road...

A Talk with Garrett Heath

"Overall though, it seems to be a lot easier to get a community or city into a road Mile, which makes the atmosphere for racing in them especially great."

"Yeah, it's been a fun but crazy week up in Seattle with Brooks meeting the team, working with marketing, and...

By Doug Binder for ArmoryTrack.com

Garrett Heath was seated next to a group of elite high school boys for breakfast on the morning of the Bupa Great Edinburgh Cross Country race on Jan. 11.

Catching Up with Garrett Heath

"I think road Miles are a good way to involve communities more in what we're doing and generally build interest in running."

If road Miles were an Olympic event, Garrett Heath might have an Olympic medal. We're kidding...kind of. 2013 was the year of road miling...

As his training partners moved away from the San Francisco bay area and his brother went to the Pacific Northwest, Garrett Heath knew where he wanted to go.