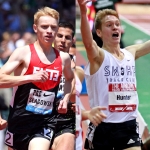 The Mile, including the metric Mile (1500 meters), continued its momentum in 2016. Since the launch of the Bring Back the Mile campaign in 2012, the storied distance, the events and the athletes have all seen a revival in interest and coverage. Overall, there are more events, opportunities and prize money for middle distance runners compared to the past couple of decades, and put simply, 2016 was truly a banner year: one for the record and history books.

Like the past 4 years, in 2016, there were a bevy of Mile highlights with great moments and historic, golden achievements. Below is a snapshot summary and chronological order of the best of The Best of the Year. 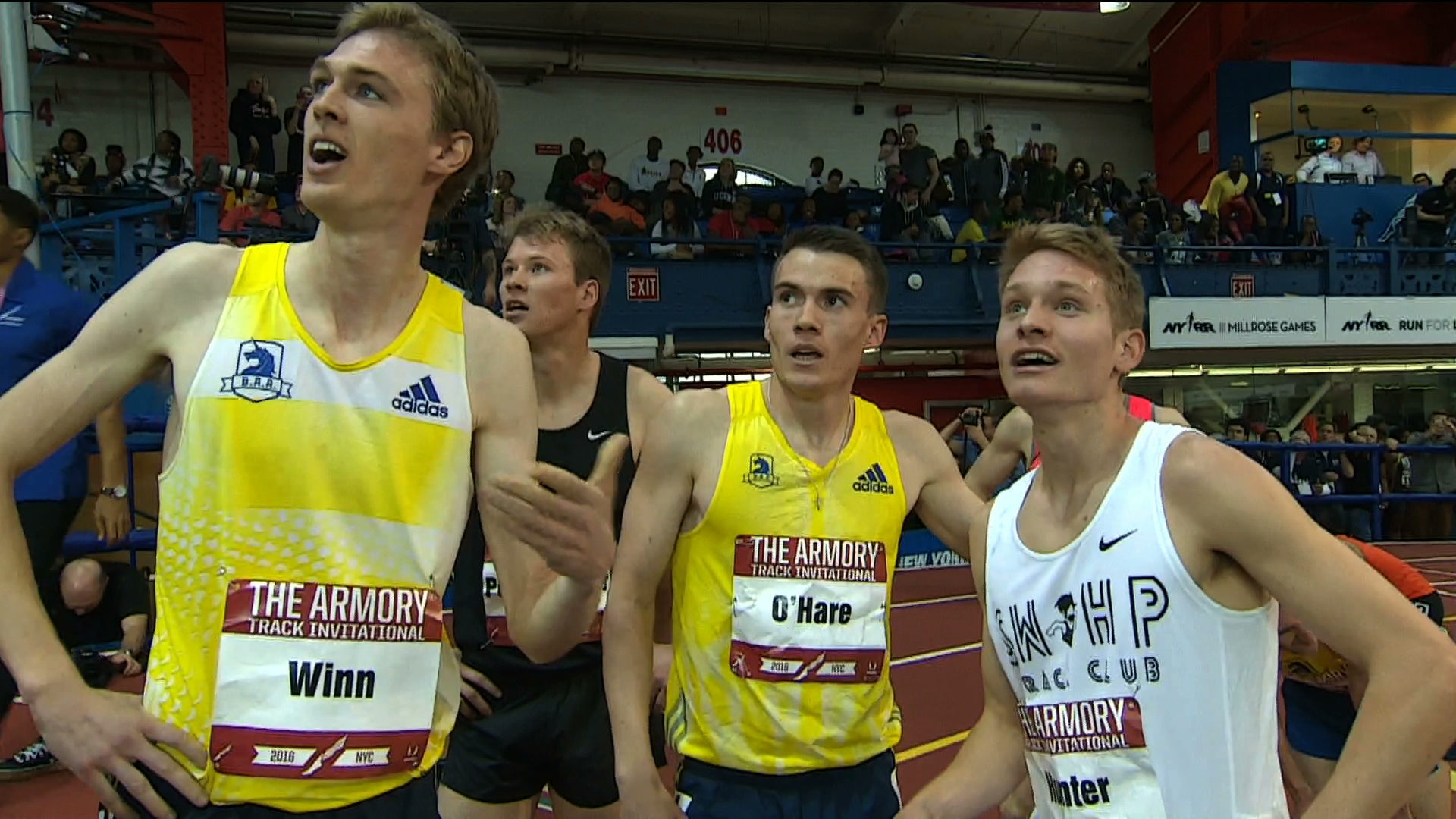 At the Armory Invitational in New York City, Drew Hunter (photo, far right), 18, became the 8th U.S. high school boy to break 4 minutes – and only the second indoors – with his 3:58.25 to finish 7th overall in the Open race. The Loudoun Valley HS senior also broke fellow Virginian Alan Webb’s U.S. HS indoor Mile of 3:59.86 set in 2001 at the Armory.

Centrowitz, Rowbury retain Wanamaker Mile titles – February 20
In a wonderful display of controlled racing, U.S. Olympians Matthew Centrowitz and Shannon Rowbury defended their NYRR Wanamaker Mile crowns. Centrowitz again beat Nick Willis at the Armory, this time, 3:50.63 to 3:51.06, for his third event win. Centro is now the 4th fastest man ever indoors in the Mile, while Willis broke his own New Zealand indoor record (#8 man indoors). Rowbury went unchallenged for the victory, clocking 4:24.39 and leading 7 other women under 4:30. NOTE: Centrowitz’s time proved to be the fastest of the year, the first time in the sub-4 era that the fastest track Mile recorded for the year was indoors.

Centro strikes gold at World Indoors – March 20
At the World Indoor Championships in Portland, OR, Matthew Centrowitz won a thrilling men’s 1500 meter race in front of a sold-out, rabid crowd. Centro held off Jakub Holusa (CZE) and Nick Willis (NZL) in a near blanket finish, 3:44.22 to 3:44.30 to 3:44.37, for the first U.S. men’s world 1500 title. Teammate Robby Andrews closed well to finish fourth to just miss the podium, recording 3:44.77.

Slagowski also joins the Club – April 29
Senior Michael Slagowski of Rocky Mountain High School (ID) became the 9th U.S. prep and only the third in a high school-only competition to break 4 minutes, clocking 3:59.53 at the Nike Jesuit Relays in Portland, OR. His previous PR was 4:05.71, and his impressive performance also marked the 4th sub-4 Mile by a U.S. HSer in the past calendar year and second in 2016 (also Drew Hunter, see above). 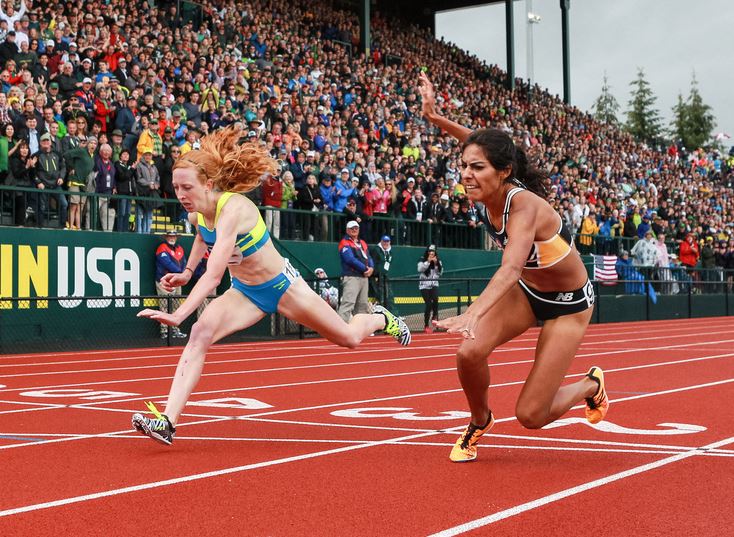 In both metric Mile races at storied Hayward Field, with thrilling final strides, the drama unfolded for the coveted final Olympic team berth, third place.  Ben Blankenship held off 2012 Olympic 1500m silver medalist Leo Manzano, 3:36.18 to 3:36.62. For the women, Brenda Martinez (photo, above right), who fell during the Trials 800 meter final, and Amanda Eccleston (photo, above left) both dove at the finish line with Martinez just edging Eccleston, 4:06.16 to 4:06.19.

Sir Walter Miler record romp – August 5
At the third Sir Walter Miler in Raleigh, NC, with 2,000 fans, many on the Meredith College track, Kyle Merber & Lauren Johnson won their respective races in 3:54.87 and 4:25.04 to also set personal, meet and outdoor North Carolina records. Merber led 8 other U.S. men under 4 minutes (the second most in the same race), while Johnson pulled 5 U.S. women sub-4:30. In addition, Mikey Brannigan set a Paralympic World Record with his first sub-4, clocking 3:57.58. What a night for the Mile in America!

Simpson makes USA 1500m Olympic history! – August 16
Jenny Simpson, with a closing flourish, won the 1500 meter bronze medal at the Rio Olympics, the first Olympic medal by a U.S. woman in the metric Mile, breaking the beam in 4:10.53 to make history. Her teammate and rival Shannon Rowbury finished right behind, clocking 4:11.05 for fourth. Brava, Jenny & Shannon! 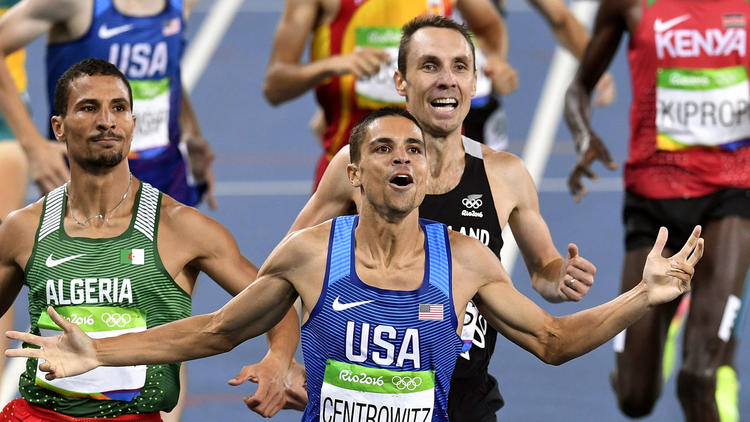 Centrowitz strikes Gold in Rio Olympic 1500! – Aug 20
Matthew Centrowitz (left), in a tactical race, closed smartly with a sub-51 second final lap to win the first U.S. Olympic 1500 meter gold since Mel Sheppard (London 1908), clocking 3:50.00. Ben Blankenship was 8th in his first Olympic final. After the race, Cento was saying to anyone around him: “Are you kidding me?” Nope, you are Olympic champion! This was the Best Moment of the Year too. 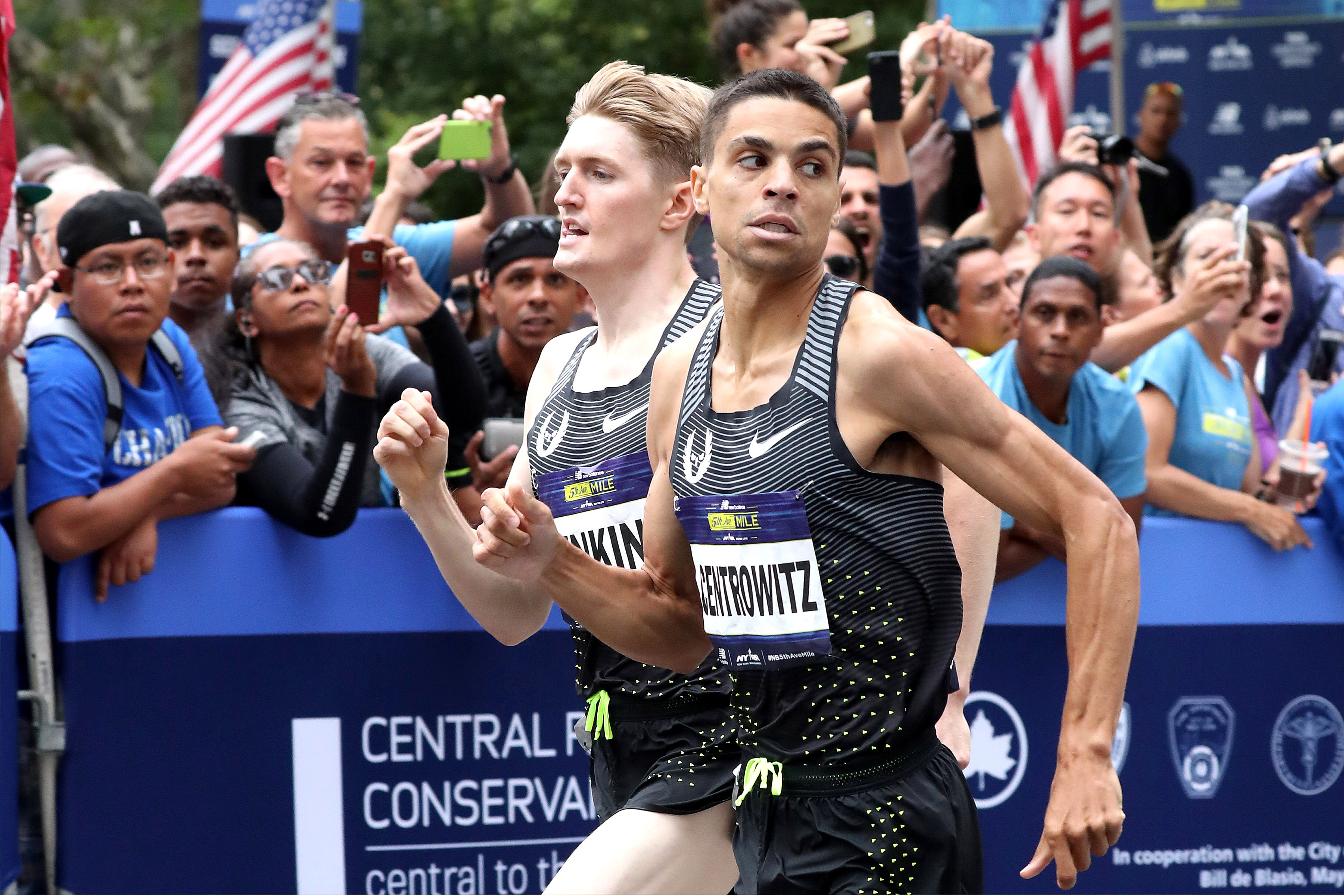