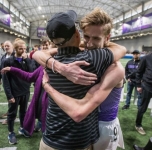 “Watching Logan break four was incredible. I was with a group of teammates in Portland watching on the TV, and once he finished we were waiting for his official time, and once we saw it was sub-4 we all went crazy."

By Ana Clyde, The Beacon

Over winter break, track & field redshirt senior Logan Orndorf set a new record as the first Pilot in University of Portland history to run a Mile in under four minutes, finishing with a time of 3:59.94 at the UW Indoor Preview on Jan. 12 (U.S. male #523 sub-4). The previous indoor Mile record was held by UP alum Ryan Poland (4:01.28).

“It’s very special to me just because there’s been so many guys that I’ve looked up to that have gotten really close,” Orndorf said. “And to finally kind of pick up where they left off is just really cool to finally, hopefully lead the way for a lot more guys to keep breaking sub-4.”

Running a sub-4 minute Mile was always in the back of Orndorf’s mind, especially once he started to compete at the college level. He’s looked to other guys on the team, like track & field alumni Jeff Thies, and to professional runners that have done it. So, as he came into this race, he thought that maybe this would be the chance he got to join an elite club of runners.

But Orndorf thought he had missed the time once again, glancing at the clock as he crossed the line and seeing the time change to 4:00. Or so he thought. As he heard his teammates cheering, he looked back to double check on his time and saw that he had done it. He broke a university record by about a second.

“So initially I was like ‘aw crap, I didn’t get it,’” Orndorf said. “And then I just kind of sat on the track for a second thinking ‘maybe next time.’ Then I got up, looked at the screen where all the actual results were (and thought) ‘what if I did hit it?’ And I looked up and saw the time and was like ‘holy crap.’”