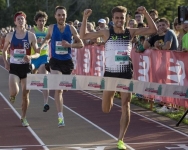 FALMOUTH, Mass. - Falmouth Road Race, Inc., organizers of the Falmouth Elite Mile, an invitational Mile open to male sub-4:00 and female sub-4:40-minute Mile runners, have announced the fields for its 25th running. The field is led by Craig Engels, the returning two-time men’s champion (2017-18), and Helen Schlachtenhaufen, the 2018 women’s runner-up. The Falmouth Elite Mile will take place on Saturday, August 14 at 3:00pm, during the Falmouth Track Festival, presented by ASICS, at the newly renovated James T. Kalperis Track at Falmouth High School. This year’s $25,000 prize purse is thanks to a generous sponsorship from the TCHS Mile sponsor, the Cochary-Gross family.

Challenging Engels in the men’s race are Johnny Gregorek and 2020 Olympian Mason Ferlic. The 2019 Pan American Games silver medalist in the 1500m, Gregorek holds the second-fastest indoor Mile time by an American with his 3:49.98 set at Boston University in 2019. Unofficially the world record-holder for the Blue Jean Mile, Gregorek ran 4:06.25 in jeans and raised more than $35,000 for the National Alliance on Mental Illness in memory of his brother, Patrick. Gregorek grew up in Seekonk, Massachusetts.

Ferlic recently made his first U.S. Olympic Team in the 3000m steeplechase. He won the 2016 NCAA D1 Steeplechase while competing for the University of Michigan and represented the U.S. at the 2019 World Athletics Cross Country Championships. He currently trains with five-time Olympian Nick Willis, who is a two-time Falmouth Elite Mile runner-up.

The men’s field also includes Pat Casey, the 2018 NACAC silver medalist in the 1500m and Daniel Herrera, who holds dual U.S.-Mexican citizenship and seeks to improve his Mexican Mile record of 3:56.13. Herrera was the 2018-19 Bring Back the Mile Grand Prix Tour champion. Rounding out the field is Brett Meyer, the DII National Champion at 1500m; Craig Nowak, a two-time All-American at Oklahoma State; Geordie Beamish of New Zealand, the 2019 NCAA indoor Mile champion; Bryce Richards, who clocked a top Mile time of 3:57.61 this season; and Drew Piazzi, who grew up in Danvers, Massachusetts and ran for UNH and Virginia Tech. Making his Falmouth Elite Mile debut is four-time Canadian 1500m champion and Olympian Charles Philibert-Thiboutot aka ‘CPT’.

In the women’s race, 4:27 Miler Schlachtenhaufen, who resides in Boston, Massachusetts, recently finished fifth at the 2020 U.S. Olympic Track Trials 1500m and was the 2018 Falmouth Elite Mile runner-up. She will face competition from recent Liberty Mile winner Sinclaire Johnson, the 2019 NCAA 1500m champion, and Sara Sutherland, a four-time NCAA All-American at the University of Texas.

The trio of Katrina Coogan, a Georgetown All-American who just ran the 5000m and 10,000m at the 2020 U.S. Olympic Trials; Taryn Rawlings, a 1500m standout who competed at the University of Portland; and Karisa Nelson, the 2017 NCAA indoor Mile champion and 2019 NCAA indoor Mile runner-up will also set a fast pace for the women’s event.

Racing for the first time in Falmouth is Alli Cash, who ran two world-leading marks in the indoor Mile this year and Katie Wasserman, a Columbia and Notre Dame standout who finished second at the 2021 D1 NCAA 5000m Championships.

Coogan and Sutherland also will run both the Falmouth Elite Mile and the 7-mile ASICS Falmouth Road Race.