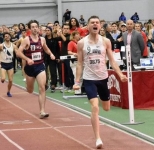 "Not only was it a historic milestone for me, but it was also a very emotional day. My grandmother passed away from cancer last summer and that very day was her first birthday since. I actually had her name written on my spikes."

One of the top highlights for Villanova track & field during the 2019-20 season came on February 15 in Boston when sophomore middle distance runner Charlie O'Donovan became the 42nd athlete in school history to break 4 minutes in the Mile. Competing in the David Hemery Valentine Invitational hosted by Boston University, O'Donovan made a surge in the final 50 meters of the race to cross the finish line in 3:58.95. He sat down recently to re-watch video of the race and provide his perspective on the memorable occasion.

The sub-4 minute Mile is one of the most celebrated milestones in track & field, and O'Donovan's addition to the remarkable list of Villanovans who have accomplished the feat was one that he had steadily worked towards during his career. His race in Boston took place two weeks after he had come within two seconds of the milestone at a Wildcats home meet in New York.

"I knew that [Boston] was a great opportunity to break four minutes," O'Donovan said. "Two weeks prior I had run a personal best at the time of 4:02 for the Mile at the Villanova Invitational. I didn't feel like I maximized my potential that day so I knew with another two weeks of training, if things were to come together on the day it was a possibility to break four minutes."

The significance of running a sub-4 Mile stands alone without the need for additional supporting detail, but O'Donovan joined another exclusive group that he is particularly proud of. He is one of five runners from Leevale Athletic Club in his hometown of Cork City, Ireland who have broken the four-minute barrier. Three of the five are Villanovans; each of the other two have coached O'Donovan on his way to joining their elite ranks.

Villanova head coach Marcus O'Sullivan is one of only three athletes in history to run a sub-4 minute Mile more than 100 times. O'Donovan's high school coach was Ken Nason, a 1995 Villanova graduate whose first career sub-4 race came during his senior season running for the Wildcats.

"That is a really special thing for me," O'Donovan said. "The connection between Marcus, Ken and I is a rather special one. We are all from the same hometown in Cork and from the same club, Leevale. They are both Villanova sub-4 minute Milers so it's always something that I have had in the back of my head. I felt as if I was fulfilling a rich legacy to break the barrier myself and to be connected to them on that level."

O'Donovan came into the race in Boston with the mindset of wanting to compete rather than keep his eye on the clock. His heat of the Mile was a strong one, with nearly all 12 athletes in the section having previously posted a sub-4 time or trained at that level. A pacer took the field through the first half of the race before dropping out just after the 800 meter mark.

"I knew that the pace maker was very solid and that he would take us through at the exact pace that he did, which was 1:58 high through just over the halfway mark," O'Donovan said. "Given the quality of the field I wanted to be in the top half of the field and in the top couple honestly, ideally not in the front, but if I was I would have rolled with that.  It just so happened that after the first 100 meters I was able to slot into the second position, excluding the pace maker. I pretty much stayed there for all of the race. That was nice because I was able to hug the inside rail and stay comfortable without any obstacles."

The race was hotly contested throughout and offered plenty of intrigue from a tactical standpoint, with the sub-4 storyline only fueling the drama. A runner from Tracksmith Trackhouse in Boston, Patrick Gregory, moved into the lead with two laps to go and widened his gap on the field when the bell rang for the final 200 meters. O'Donovan and Wildcats teammate Logan Wetzel were second and third behind Gregory when he moved into the lead.

"At this point me and Logan are together and it is more inspiring to have a teammate of yours that you train with everyday next to you rather than someone you don't know who you are competing against," O'Donovan said. "That was a degree of comfort.  It was an aggressive move when [Gregory] hit the front with two laps to go. I spotted it immediately which I was glad of, but it was too hard to respond immediately so I knew I had to make up the ground over time. I still had Logan with me which was really encouraging and we were moving together."

O'Donovan noted that he could recall virtually all of the race until the bell lap.

"That is the point where it starts to get a bit blurry," O'Donovan said. "I had only looked at the clock once the whole race and it was the previous lap.  The atmosphere in the stadium was amazing as it always picks up towards the end of the race when a potential sub-4 is on  I do vaguely remember seeing the cadence of the athlete in front of me falter. I was feeling really good so I was coming into it at this point. Even when I was coming into the last bend I did not realize I was actually winning. I was just wanting to look at the clock."

As he strode towards the finish line, O'Donovan pumped his fist in celebration when he realized he would come in below the coveted 4-minute mark. There was added meaning for him running his first sub-4 race on the date that he did.

"You can see on the video at this point that I knew I was going to do it and you could see how much it means to me in the celebrations," O'Donovan said. "Not only was it a historic milestone for me, but it was also a very emotional day. My grandmother passed away from cancer last summer and that very day was her first birthday since. I actually had her name written on my spikes. That definitely played into the emotions of the celebrations."

O'Donovan passed the finish line and had a mere moment to himself before his teammates mobbed him in celebration. As he turned around, he caught his official time popping up on the electronic board at the finish line.

"That was honestly a moment of realization, even seeing 3:58," O'Donovan said. "I did not think it was 3:58.9. That was the icing on top of the cake you might say. I am kissing a medal there which is for my grandmother. I knew when I crossed the line it was under four, but it takes more than a couple of seconds for the whole achievement to sink in."

Looking back on the race, O'Donovan sees his accomplishment as a springboard to more successes on both an individual and team level.

"That was a very special day for me and I hope that there's many ahead in the future for both me and my teammates."