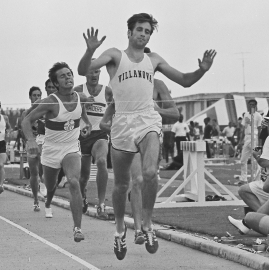 He was just a sophomore then and followed with two more NCAA Mile...

“I felt I could not have run a more perfect race.”

Steve Landells for the IAAF

The IAAF takes a look back at five unforgettable, historic races over the classic Mile distance.

Roger Bannister’s Mile world record may have only lasted a mere 46 days but his place...

Only one high school in the state has produced two sub-4 Milers.

With Monday marking the 65th anniversary of Roger Bannister becoming the first sub-4 minute Miler ever, this seemed like a perfect time to take a look at all the New Jersey high school grads who...

Growing up in Western PA, all my buddies wanted to be Terry Bradshaw (Pittsburgh Steelers QB). I wanted to be Marty Liquori!

Our winner of the $500 for 500th U.S. Sub-4 Mile presented by Running Warehouse fan contest was Coach Greg Bixel of Pennsylvania. His guess of...

Marty Liquori in full flight, still viewable on the Internet, has to be one of the finest sights in competitive running. He appeared on the running scene in 1967 as the third American high-schooler to break the 4 minute Mile. The 17-year-old from New Jersey was only seventh in...

"Playing a guitar is not a talent any more than running the Mile is a talent. It’s about work and taking a scientific approach to things and progressing.”

There was a time when the world knew Marty Liquori for his legs and feet, which for a memorable...

"Ryun was so dominant, everyone in the stadium was on their feet," remembers Larry Knuth, a longtime Los Angeles track & field coach who was there that night. "People were going nuts."

By Cathrine Merlo, The Bakersfield Californian

BAKERSFIELD, Calif. – Those who were there still remember the...

By Robbie Andreu, The Gainesville Sun

Marty Liquori’s phone has been relatively quiet the past week. That’s not the way it used to be with the approach of a significant anniversary of the Dream Mile.

Forty Years After a Dream Mile, a Harsh Reality for Track

The news that the Millrose Games are leaving Madison Square Garden after 97 years to relocate uptown to the 168th Street armory reminds us of how indifferent we are to track and field. And yet, in a coincidence of timing, we remember, too, that we were not...

The Ryun vs. Liquori Duels

Mile legends & Olympians, the Ali-Frazier of the track world, produced some epic races vs. each other

So far as I am aware, Marty Liquori and Jim Ryun raced each other a total of eight times. Ryun won the first four races. The fifth race -- the 1969 NCAA Indoor...

Is There Hope for U.S. Milers?

Fifty years ago today, Roger Bannister recorded the first sub-four-minute Mile — 3:59.4. Since then, as the world record has improved 16 seconds, elite U.S. male Milers have become practically an endangered species.

In an Olympic year, the talk isn't if the USA will...

Sprinting away from a classy field in Kingston, Jamaica's Dream Mile, 21-year-old Filbert Bayi of Tanzania broke Jim Ryun's 8-year-old world record to clearly establish that he is the King of the Milers

It was a world record performance that defied logic, a set...

It was advertised as the Dream Mile, and though for the contestants it often seemed like the Nightmare Marathon the race lived up to its billing as Marty Liquori held off Jim Ryun on the last turn to win

For the first three-eighths of a Mile, it could have...