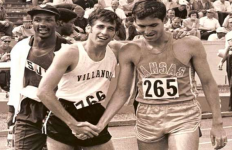 In 1968 Marty became the youngest Olympic 1500 meter finalist in history at age 19. His Olympic chances were thwarted by injuries in both 1972 and 1976. Perhaps his most memorable race was winning the 1971 ‘Dream Mile’ against Jim Ryun, though he set his 3:52.2 personal record in finishing second to Filbert Bayi’s 3:51.0 world record at the 1975 ‘Dream Mile.’ He won the gold medal at the 1971 Pan Am Games in the 1500 meters. Marty was a member of Villanova’s 1971 NCAA Cross Country team champions and nine Penn Relays champion relay teams. His stellar high school career at Essex Catholic (New Jersey) included winning the Eastern States Cross Country Championships and his team setting American records for both the distance medley and the 4 x Mile relay.

GCR: Whether it is as a runner, broadcaster, businessman or musician you seem driven to excel and to reach for your potential. Is this something you developed when you began running as a youth or was it instilled in you at an earlier age by your upbringing?

ML: What I have is the addictive personality which is both a blessing and a curse. Whatever I do I want to do to the best of my ability. The lessons I learned from running did make is possible for me to have success in other areas. There were many corollaries between running and music which I have concentrated on much more during the past dozen years. When I talk with fellow musicians I find that they don’t approach their craft the same way I do with my discipline. Also, because I was successful as a runner I believed I could also do well as a musician. Unfortunately it leads me to believe I can succeed at anything through consistent effort – even wind surfing. My personality is such that I can’t just do something a few times a year for fun – I have to achieve a certain level of competence. So now I know that I can’t take up golf as I’ll go off the deep and with practicing. I keep threatening to take up painting, but I’m holding back as music has become more than I bargained for. My wife is obsessive and so am I which does help because she realizes the focus it takes to do something well.

GCR: Many runners have credentials that are only achieved by a select few. What does it mean to be one of only five United States high school runners to break four minutes in the Mile?

ML: I think it blinds people to the rest of my career. I don’t consider it one of the top five accomplishments in my running career, but the public has a fascination with the 4 minute Mile. There are dozens of African kids who have run that fast by the time they were 18-years-old, so it isn’t really that big of a deal worldwide. What I did in high school is just that – what I did in high school. Only a handful of runners have ranked #1 in the world at 1500 meters which I believe that is a much more significant accomplishment.

GCR: When you ran your 3:59.8 Mile as a high school runner you finished in seventh place behind Jim Ryun’s world record of 3:51.1. What were your thoughts when you found out you had broken four minutes?

ML: I had qualified for the final the night before with a time of 4:08 and in the final I was so far behind after three laps that I didn’t even consider I could break four minutes. But when I heard my time of 3:02 I just took off. I knew I could run a 58 second quarter mile and even if I died during the last 100 yards that I had to go immediately. I knew I had a chance. Afterward I was walking around for what seemed a long time, though it was probably two minutes, when Sam Bell came over and told me I ran 3:59.8. I called my coach, Fred Dwyer, and told him my time, and got congratulations. I did say to him though that someone would be doing it every year as this was four years in a row a high school runner had broken the 4 minute Mile so it wasn’t that big of a deal. But Freddy said, ‘No, I think it’s always going to be something special.’ He was right as it didn’t happen again for over thirty years. However, there didn’t seem to be the emphasis in future years that we had in the 1960s. I was in California in 1967 for about a month of training and racing, had already ran 4:01.1 and 4:00.4 and didn’t even attend my high school graduation. Another fact is that the 4 minute Mile was nine seconds off of the world record when I was running and now is over 15 seconds behind the world record. So this helped me to get into top races due to my times and my coach’s connections. Top high school runners these days can’t get into those big races.

GCR: How good was Jim Ryun’s world record race and could you have imagined the epic duels you and Ryun would have in the future?

ML: There are three points about that race which indicates Jim Ryun’s greatness: First, it was a dirt track; second, there were no pace setters and third, he ran in the lead the entire way and was just barely under three minutes at the three quarter mile before running a crazy fast last lap. So that world record was worth a lot more than a 3:51 if it was run on a tartan track with competition, pace setters or both. I couldn’t have imagined racing at the front with Jim Ryun as he was on another planet. I didn’t think I would improve as fast as I did in the next few years.

GCR: Just as Ali-Frazier peaked interest in boxing in the 1970s and Borg-McEnroe invigorated tennis in the early 1980s, how exciting was it to you personally and important to track & field to have the Liquori-Ryun battle in the Mile in the late 1960s and early 1970s?

ML: It was important to me and helped me because there was an American who was very good at running the Mle and this took away a psychological burden. History is ripe with competitors from the same country coming along at the same time whether it was Arne Anderson and Gunder Haag in Sweden in the 1940s or Sebastian Coe, Steve Ovett and Steve Cram in England in the early 1980s. When there is someone in your own country to race against it makes both runners better. The interest in the United States was big because there were sports on television on Saturday and the entire country was tuned in to watch.

GCR: The May, 1971 ‘Dream Mile’ that featured you and Ryun was hyped as much as any sporting event. How much anticipation was there on your part and what was your pre-race strategy?

ML: I felt I was unprepared for the race as it was early in the season in May and Jim had raced some good times out in California. Also, he had run 3:51 and my best time was about 3:56 so why would I feel I was ready to win. My best 800 meters was 1:48 and his was 1:44 so I knew he had more speed than me. Any strategy had to involve somehow neutralizing his kick.

GCR: When you went through the half mile in only 2:03 how did you rearrange your race plan to attempt to win especially since Ryun had such great speed.

ML: Coach Jumbo Elliott and I felt that if he ran from the front that with every step he would get more confident so that is why I had to take the lead on the third lap and increase the pace.

GCR: You both ran a 1:51 last half mile as you held off Ryun by a step in a personal record at the time of 3:54.6. Since you led and pushed the pace the final 700 meters, was the key to victory that such a long drive was necessary as Ryun’s quarter mile speed was two seconds faster than yours?

ML: I modeled myself after Herb Elliot’s style and he usually took the lead with around 600 meters to go. I had drilled into my mind that I didn’t have a good kick at the end and that I had to go early. The reality when looking back is that I wasn’t really a Miler – I was a 5000 meter runner. But when you are ranked #1 in the world in the 1500-Mile meters the race directors want you in the 1500 or Mile which led to me running much of my career in the wrong race. In those days the Mile was such a glamor event that it was better to be the fifth best Miler in the world than the top 5000 meter runner.

GCR: When you entered the home stretch and Jim Ryun was on your shoulder, was it surprising that he was unable to drive past you with his fearsome kick?

ML: It was surprise, but when I go back and analyze the race, neither of us had a kick left since I pushed the pace so early and my strategy did play out well.

GCR: Was that the turning point in your duels with Ryun or was it two years earlier when he won the 1969 NCAA Indoor Mile and you turned the tables on him by winning the Mile at the NCAA Outdoors and AAU Championships?

ML: The 1969 NCAA Indoor Mile in Detroit was the turning point as I lost in a photo finish and realized that we were equal and that whoever worked harder could win from then on out. 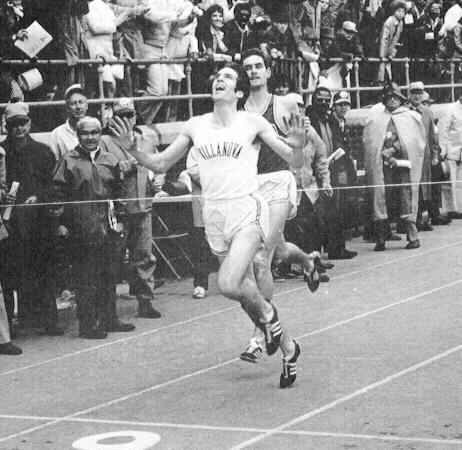