It was advertised as the Dream Mile, and though for the contestants it often seemed like the Nightmare Marathon the race lived up to its billing as Marty Liquori held off Jim Ryun on the last turn to win

For the first three-eighths of a Mile, it could have been just another ho-hum footrace between a bunch of guys named Smith and Jones—or, as it turned out, Savage and Mosser. For weeks people in Philadelphia had been promoting the long-awaited match-up between Jim Ryun and Marty Liquori as the Dream Mile. But last Sunday, when the leader, a Manhattan College freshman named Joe Savage, idled past the three-eighths mark with Morgan Mosser of West Virginia on his heels, the fans began to wonder if they had come to the right stadium. Which was about the same time Jim Ryun was wondering why 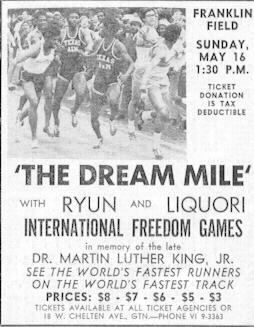 he was running so slowly, so he shifted gears and led the field through a 2:03.3 half-mile.

"I thought the pace was too slow," he said later. "I hadn't done much speed work, and I didn't think I was ready for an all-out 220 at the end. I guess Marty had the same thoughts. We both figured the way to win was with a long, fast, last half mile."

Equally annoyed by the dawdling pace, Liquori fell in two strides behind Ryun. For 110 yards he waited for Ryun to turn it on. When he didn't, Liquori did, although it didn't make him happy. "Too soon to be out in front," he thought. He glanced over his shoulder and there was Ryun, gliding along a few steps to the rear. Liquori hit the three-quarters in three minutes flat. "Oh, my God," he thought. "It's still too slow." He knew what Ryun could do off that kind of pace, but he wasn't sure what he could do. "He's just sitting on my shoulder," Liquori thought, "and any moment he's going to eat me up."

Liquori, who had covered the third quarter in 56.5, kept glancing back over his shoulder.

"I was running scared," he said. "That damn slow pace. It suddenly came to mind how he had blown so many other people, mature people like Keino and Bodo Tümmler, right off the track. I was going to sprint when he pulled up on my shoulder, but he never did until the last 110 yards."