The Ryun vs. Liquori Duels

Mile legends & Olympians, the Ali-Frazier of the track world, produced some epic races vs. each other

So far as I am aware, Marty Liquori and Jim Ryun raced each other a total of eight times. Ryun won the first four races. The fifth race -- the 1969 NCAA Indoor Championships in Detroit -- was a photo finish, with Ryun declared the winner, but Liquori still believing years later that he had in fact won. The final three races were won by Liquori, punctuated by the 1971 Dream Mile that landed Liquori and Ryun on the cover of Sports Illustrated. I don't believe they ever faced each other again. Here are the eight races:

1) June 2, 1967 at the Compton Relays in Los Angeles, Jim Ryun, a 20-year-old rising junior at the University of Kansas and already the world record holder at 880 yards, wins the Mile race in a solo, swift 3:53.2. Liquori, a senior at Essex Catholic in New Jersey and a few months short of enrolling at Villanova, was chasing his first sub-4:00 Mile. He had run a 4:04.4 at the Penn Relays that spring and was in California on a three-race swing in search of fast races. At Compton, Liquori came closer to achieving his goal, coming third in 4:01.1. A few days later, in San Diego, Liquori ran 4:00.1 and beat his future Villanova teammate Dave Patrick. In his next race versus Ryun, a few days later in Bakersfield, Liquori would achieve his goal.

2) June 23, 1967 in Bakersfield, California, at the AAU National Championship, Ryun lowered his Mile world record, running 3:51.1 (a record that would stand for eight years). Liquori, a 17-year old senior at Essex Catholic in New Jersey, qualified for the finals by running 4:08 in the heats the day before. In the final, he finished 7th, but became the third high school prep runner to break the 4:00 barrier, running 3:59.8. Fifteen days later in Los Angeles, Ryun would add the 1500 world record to his resume, defeating Kip Keino in 3:33.1.

3) September 16, 1968 in Lake Tahoe, California, the "second" 1968 Olympic Trials were held at altitude to simulate the Olympic venue at Mexico City. The pre-Trials buzz was that Villanova's Dave Patrick would challenge Ryun for Mile supremacy, but it was not to be. The Kansas phenom won easily and Patrick finished in the dreaded 4th place (and off the USA team).  However, Villanova's sophomore Marty Liquori surprised observers by finishing second to Ryun and making the USA squad. Liquori went on in Mexico City to become the youngest ever 1500 meter finalist in Olympic history.

4) October 19, 1968 in Mexico City, both Ryun and Liquori advanced easily on October 18th in separate preliminary 1500 meter heats. Ryun won heat 4 in 3:47.5, while young Liquori won heat 5 in 3:52.7. They would both be slotted for heat 2 of the semi-finals for the next day, with the top 6 finishers qualifying for the Olympic final. On October 19, Ryun won the 1500m semi-final heat #2 in 3:51.2. Liquori came fourth in the heat, in 3:52.1, becoming the youngest person in Olympic history to qualify for the 1500 meter final. That race would occur the next day. Unfortunately, Liquori injured his foot in this semi-final, putting his competitive chances in the final at grave risk.

5) October 20, 1968 in Mexico City, in the Olympic 1500m final, Kip Keino displayed a courageous case of front-running and won the Olympic 1500 meters in an impressive Olympic record 3:34.91. Ryun (who had not previously lost to rival Keino) trailed by 25 meters and earned the silver in 3:37.80. Liquori decided to run in the final despite the stress fracture in his foot, finishing 12th and last in 4:18.22.

Below, Liquori congratulating Ryun after the 1968 Olympic 1500 semi-final 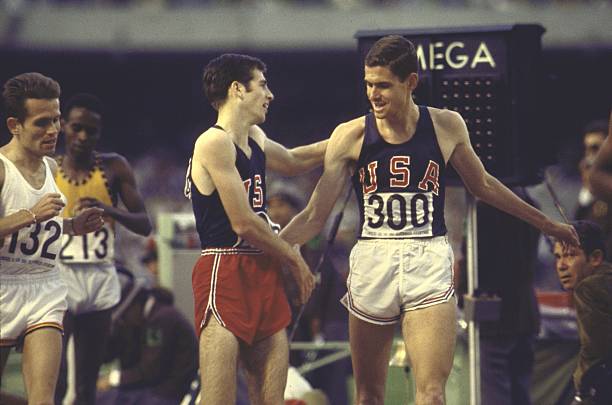