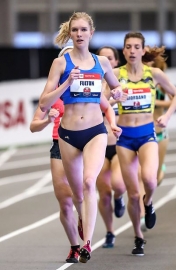 Fulton finished third in the BBTM Grand Prix Tour 2019 with three top 4 placements and was 7th at the USA Indoor 2 Mile Championships.

At the University of Washington, she was a four-time All-American.

In high school, Eleanor swept the Colorado 5A State Track Championships her senior year, winning titles at 800m, 1600m and 3200m to finish with eight individual track titles for her career, including four straight 1600m crowns.

Eleanor Fulton’s patience is paying off

“I would like to be able to compete at a world level... I just keep thinking, ‘Okay, just one more jump. Can I make one more little jump in the 1500m?’”

RALEIGH, NC - On a warm, humid summer Friday night with a loud crowd at the 8th Sir Walter Miler, athletes had extra incentive to go after the North Carolina state Mile records held...