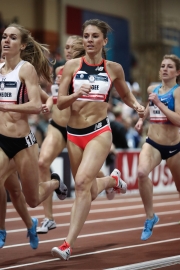 At the 2013 USA Outdoor Track & Field Championships in Des Moines, she finished a surprising third in the 1500 meters and later qualified for the World Championships 1500 in Moscow. Also in 2013, the three-time All-American Florida Gator was NCAA 1500m runner-up and ran PRs for the Mile (4:32.10, Husky Classic indoors) and 1500 meters (4:10.55, Payton Jordan Invitational).

The two-time Mississippi Class 4A State champion at 800m & 1600m, McGee claimed the high school Mile title at the 2010 Millrose Games, and at Pass Christian HS, she won 22 state titles!

In the United States and beyond, the 1500 meter distance is a notoriously competitive event. And among the U.S. women, the depth of talent meant that the...

Unlike most athletes who will be competing in Tokyo, Pass Christian native Cory McGee had in-person exposure...

Cory McGee, Dani Jones and Emma Coburn took advantage of racing at sea level for the first time outdoors this year and achieved history by becoming the first American...

"This has been my best year yet so my trajectory is good. And I’m still getting better."

PASS CHRISTIAN, Miss. - Cory McGee is one of the best 1500 meter runners in the country and her sights are now set on the U.S. Olympic team. We caught up with the South...

FALMOUTH, Mass. – On a picture perfect Saturday evening on Cape Cod, Josh Thompson and Cory McGee kicked their way to victories in the...

RALEIGH, N.C. – After an hour weather delay on Friday evening, in steady rain, the Meredith College track and Sir Walter Miler atmosphere delivered yet again. In the women’s race, a sprint finish...

My advice for any younger athlete is to never hesitate to love what they do... be committed and surround yourself with people who love your passion.

This year we are honored to have former Florida Gator and New Balance professional Cory McGee as our celebrity guest...

Southern cooking rules in the diet of this Miler.

In 2013, while she was an undergraduate at the University of Florida, Cory McGee ran her 1500m PR of 4:06.67. That was the same year she made the U.S. team for the IAAF World Championships in Moscow. Now training...

“I just hope to bring back some of the things I learned this summer.”

Cory McGee is trying to catch her breath as she prepares for the cross country season.

This summer, McGee (right, PhotoRun) ran for the Gators track and field team, participated at the USA...

The Florida senior-to-be talks about making the U.S. team headed to Moscow for the World Championships

Cory McGee got started running alongside her father, Jim, at age 9 in Pass Christian, Miss. But her first taste of racing came a few years later, while the...

The quest that started a month ago is now over. The University of Florida's Cory McGee earned her spot on the plane to represent the USA at the World Championships in Moscow next month.

It began at the USA Outdoor Track & Field Championships in Des Moines, Iowa....