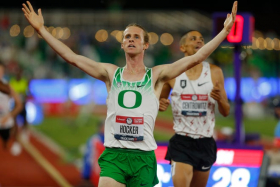 The rising U.S. star won a thrilling 2021 U.S. Olympic Trials 1500 meters, setting a personal record of 3:35.28 and beating reigning Olympic champion Matthew Centrowitz to qualify for his first Olympic team. In Tokyo, he finished 6th in the 1500m, clocking a PR of 3:31.40. In September 2021, Hocker signed with Nike, becoming a professional runner.

Bowerman Mile again draws the best of the Best

The Prefontaine Classic has churned out more sub-4 minute Mile performances than any other American meet, and the storied Bowerman Mile has played a pivotal role...

"So, we had a little bit of a race strategy with our two pacers in front and then Morgan. He definitely threw in an extra element of adding that race feeling, which is just so awesome and made for a fast race.”

CHICAGO — On Friday night, February 11th when a...

EUGENE, Ore. – Cole Hocker has signed with Nike and will forego the remainder of his collegiate career at Oregon to start his professional career. He made...

After a four hour delay due to extreme temperatures from a rare Pacific Northwest heat wave, the fans at Hayward...

"I really want to make the final. That’s a big goal. And then once I’m in the final, I think I just have just as good a shot as anyone."

The youngest outdoor national champion in the 1500 or Mile since 1911: “This whole year, I felt like I was proving myself to the world, but also proving my talent to myself."

Over the course of three minutes, Cole Hocker was far from the desired destination,...

Sophomore sets meet record in the Mile: “I definitely feel like I’m in the best shape of my life."

Cole Hocker did everything he could have done except set a world record. If he had gone for it, you never know.

“I definitely feel like I’m in the best shape...

Miling is breaking out in Duck Town. Again. With head-scratching times and depth. Many aspects of life have come without precedent in the...

Sub-4 Mile? Maybe not this year, but Cathedral’s Cole Hocker is on his way

INDIANAPOLIS – With shoulder-length blond hair and piercing blue eyes, Cole Hocker resembles a teen rock star. He is something of a musician, teaching himself to...