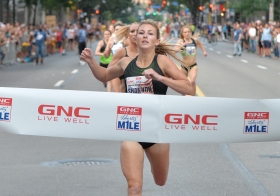 She won the 2019 Guardian Mile, clocking 4:28, the fastest Mile run in Ohio by a woman, and the True Blue Elite athlete has also recorded three 1500 meter personal records last year.

In July 2018, Shannon won the GNC Live Well Liberty Mile, breaking the tape in 4:34, her first BBTM GP Tour win, and one week later, she set an event record of 4:20.81 at the Ryan Shay Memorial Mile (a personal best time on the downhill course). In August, Shannon won the Ed Murphey Memphis Mile, setting a Tennessee state record time of 4:25.47 (also her track PR), and her winning streak continued at the HOKA ONE ONE Long Island Mile with another clear victory, clocking 4:29.91. She also finished runner-up in the BBTM Grand Prix Tour 2018 and produced the women's Tour performance-of-the-year.

While at Michigan, Osika was a six-time NCAA All-American, closing out her senior year with a fourth place finish in the 2016 NCAA 1500m final. Shannon is also a two-time Big Ten Champion, winning the indoor Mile (2016) and the outdoor metric Mile (2016).

Spring of 2020, now heading into summer, has manifested itself as a train-and-wait game for athletes. The pandemic “why” of that is no...

CLEVELAND, Ohio – Shannon Osika made history, and Nick Willis made himself two-of-two at the second running of the Guardian Mile in downtown Cleveland on...

Shannon Osika is on a hot streak. Over the weekend, the 25-year-old former University of Michigan runner nailed a track personal record in the Wanamaker Mile at New York City’s...

HONOLULU – Oh, you could see this one coming a Mile away. 18-year-old Kenyan Edwin Kiptoo was obviously the wildcard at this...