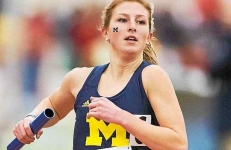 Nearly three decades later, they’re P.J. and Andrea Osika, enthusiastic parents who this time will be spectators at the Olympic Trials July 1-10 in Eugene, Ore. as they cheer daughter Shannon in her quest to make the US Olympic team.

Shannon Osika (Waterford Mott), who completed her senior season at the University of Michigan, and teammate Erin Finn (West Bloomfield), who bypassed the college indoor season to prepare for the Olympic Trials, and had met the standard in the 5,000 and 10,000 events, were a part of the Oakland County connection scheduled to compete.