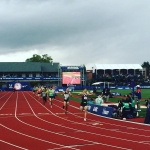 In the below tables you can sort each column as well as click on any hyperlinks to take you to that athlete's profile and news feed page.

12 to final, top 5 each semi plus next 2 fastest times

12 to final, top 5 each semi plus next 2 fastest times