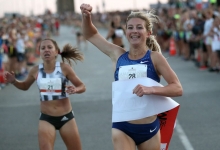 CLEVELAND, Ohio – Shannon Osika made history, and Nick Willis made himself two-of-two at the second running of the Guardian Mile in downtown Cleveland on Saturday night.

Osika and Willis were first in the Elite Women’s and Men’s races, respectively, that finished near the Western Reserve Fire Museum, across from Progressive Field.

Osika, a former University of Michigan standout who hopes to compete for the United States at the 2020 Olympics in Tokyo, completed her race in 4 minutes, 28 seconds.

The time is the fastest ever run by a female in any Mile race in Ohio. Osika, 26, topped defending Guardian Mike champion and former Villanova star Emily Lipari by one second, both under the course record by Lipari (4:33).

“I hadn’t been on this course before, but I heard good things about it,” Osika said. “I figured I’d come out here against competitive gals and get after it. I tried to keep my composure and finish strong.”

Willis, 36, a two-time Olympic medalist from New Zealand and former University of Michigan star, won a compelling men’s race in 3 minutes, 58 seconds, bettering his course record (3:59). He crossed the wire a few feet ahead of Nick Harris, who also was timed at 3:58.