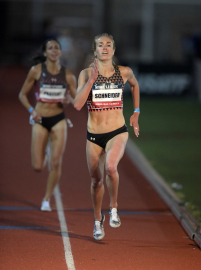 
Rachel Schneider, on a hot evening at Hayward Field, finished third at the U.S. Olympic Trials 5000 meters in 15:29.56 to qualify for her first Olympic team (Tokyo).

On December 5, 2020 in Los Angeles, Schneider stepped up in distance and won the Track Meet 10,000 meters, clocking 31:09.79 (debut), #8 on the all-time U.S. list and also earning the Tokyo Olympic Games qualifying standard.

In 2019, Rachel won the Mile of Truth, setting a course record of 4:43, in Danville, CA, and on July 4th, she broke her course record to win the Flagstaff Downtown Mile in 4:46 (altitude). At the Herculis meet's Brave Like Gabe Mile, Schneider set her personal record, clocking 4:20.91 (#5 U.S. all-time outdoors) to finish 9th overall in the race where the women's world record was broken by Sifan Hassan (NED) in 4:12.33. In late July at the USA 5000m Outdoor Championships, Rachel qualified for her first Team USA berth at the World Championships in Doha.

While at Georgetown she was an five-time All-American including three finals in the 1500 meters.

WINSTON-SALEM, N.C. – At the 10th Camel City Elite meet, Winston-Salem and JDL Fast Track will host some of the top distance athletes in the world on Saturday,...

Under Armour introduces its new professional running team, Dark Sky Distance, based in Flagstaff, Arizona. This group of best-in-class athletes consists of middle and long...

As someone who gets to see all of the work & effort put in by everyone at our store to get our events together, there’s been something about...

In a year, Rachel Schneider took her professional...

2015 has been quite the year for Hoya, Rachel Schneider, kicking off the season with a bronze medal at the USA Indoor...