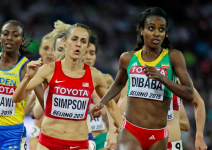 It took little more than 4 minutes for Genzebe Dibaba to run the full 1500m distance, but the damage was all done in the last two.

The opening pace was slow with Team USA’s Shannon Rowbury and Jenny Simpson leading the field through the first lap in 1:17.06. Defending champion Abeba Aregawi of Sweden was close behind but Dibaba was near the back. Britain’s Laura Muir moved up behind the U.S. pair after the first 400m.

The pace continued to dawdle for the following 300 meters, but Dibaba then made her move with two laps to go.

Simpson, the 2011 world champion, got caught up amid the movement in the pack and lost one of her shoes. But Dibaba was away and gone.