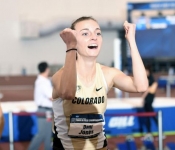 Only two women - Kaela Edwards (Oklahoma State) & Karissa Schweizer (Missouri) - have accomplished the feat in each of the last two seasons, but plenty have come close to breaking the barrier. With such a loaded class of collegiate Milers in 2019, sub-4:30 is bound to happen on multiple occasions this season, even without a single athlete in the NCAA right now who has done it.

Here are top 10 candidates to break into the 4:20s for the first time:

The NCAA Cross Country champion ran a 4:07.33 1500m last spring, which would’ve been good for sixth all-time except that Jones redshirted the outdoor season. She also ran a converted 4:29.32 last February in Boulder. Indoor NCAA runner-up in the Mile last winter, Jones seems like a lock to break 4:30 given the spectacular year she’s had.

Hull’s stardom has exploded in the last year as she won the NCAA 1500m title in June and then finished third at NCAA XC in November. After setting Oregon’s school record in the Mile last winter (4:31.76), the senior is ready to lower it under the magical sub-4:30 mark in 2019.

Paladino was in the lightning-quick BU Valentine race last year where three women broke 4:30, and another appearance in a race of that caliber in Boston could get the job done for the Providence senior. She was sixth in the NCAA Indoor Mile in 2018.

Remember her? Nelson shocked virtually everyone when she won the 2017 NCAA Indoor Mile title in 4:31.24 - more than four-seconds faster than her previous PR - and she’ll be back in 2019 after missing last season with an injury.

For the rest of the list, continue reading at: flotrack.org