What It Takes to Run a Fast Mile 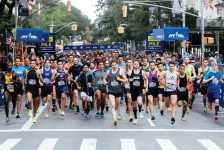 Nice table outlining the historical progression of concepts like interval training, periodization and polarized training; and some sample training weeks from champion athletes

I won’t pretend to be impartial here: I love the Mile. It demands the legs of a sprinter, the lungs of a marathoner and the tactical cunning of a chess grandmaster. Lasting roughly 4 minutes, it’s long enough for a narrative arc to unspool, and for the personalities of the various players to be revealed in their thrusts and counterthrusts, but too short for all but the very worst TV coverage to cut away for commercials or gauzy profiles. It’s the perfect distance.

But the very elements that make the Mile so much fun to watch also make it tricky for physiologists to study. Long-distance running is a maximization challenge: almost anything you can do to boost your VO2 max, lactate threshold or running economy will make you better. Sprinting is also a maximation challenge, focused instead on the ability to generate the most powerful forces and release large amounts of anaerobic energy as quickly as possible. It’s relatively straightforward to study how to maximize these parameters.

In contrast, middle-distance events—800 meters, 1500 meters, and the Mile—require a compromise between these two extremes. Increasing the force you transmit to the ground with each step, for example, might worsen your efficiency and vice versa. Instead of a maximization challenge, middle-distance training is all about making the best trade-offs possible between the conflicting demands of speed and endurance. In other words, as an ambitious new paper in Sports Medicine argues, it’s an art.

The authors of the new paper are all sports scientists, hailing from four different universities in Norway, led by Thomas Haugen of Oslo’s Kristiania University College. But they admit that our knowledge about middle-distance training is mostly derived from “the practical experience and intuition of world-leading athletes and coaches.” Their goal is to lay out the current state-of-the-art in order to identify gaps that scientists can begin to fill—and the result is a handy (and free-to-read) guide to what it takes to run a great Mile. Here are some of the highlights.

The Fuel Mix
There are two main ways your body can convert food into the energy you need to run. Aerobic energy relies on chemical reactions involving oxygen. You’ve got a nearly inexhaustible supply, but it can only be delivered in a trickle, so it’s ideal for long endurance races. Anaerobic energy, which relies on a different set of chemical reactions, can deliver big surges but is quickly exhausted, so it’s ideal for sprinting.

Whether you’re running a 5K or a marathon, you’re relying almost entirely on aerobic energy, so the training for these events is remarkably similar despite the fact that one is more than eight times farther than the other. The middle-distance events, on the other hand, require a fuel mix that depends very sensitively on the distance. In an 800 meter race, which lasts about two minutes, you get 60 to 75 percent of your energy from aerobic sources. In the 1500 meters and the Mile, it’s more like 75 to 85 percent aerobic. That means 800 runners and Milers are more different, metabolically speaking, than 5K runners and marathoners.

How sharp is that knife’s edge? Elite female 800m runners are about 15 seconds slower than elite males. That tiny difference seems to be enough to change the optimal physiological requirements of the event: female 800 runners are more like Milers than male 800 runners. Sure enough, if you look at the top 200 performers of all-time, there are 55 women who appear on both the 800 and 1500 lists, but only 38 men.

The Subspecialists
A few years ago, I wrote about British researcher Gareth Sandford’s work on a concept called speed reserve, which compares your maximum aerobic speed to your maximum sprint speed. Sandford used this ratio to distinguish between different kinds of 800m competitors, each with different characteristics and different training needs: 400 / 800 runners, pure 800 specialists, and 800 / 1500 runners. Haugen and his colleagues extend this taxonomy to include pure Milers and 1500 / 5000 runners.

What’s the difference between all these flavors of middle-distance runner? For one thing, they train differently. According to the various training logs, books, and interviews synthesized in the new paper, 800 meter runners tend to cover about 30 to 75 miles per week. Milers cover 75 to 105; 5K and 10K runners hit up to 125. (These ranges are mostly based on reports from male runners, so the authors hypothesize that female runners probably spend a similar amount of time training but rack up slightly less mileage on average, since their running speeds are typically about 11 percent slower.) Sandford’s point is that where you sit in these ranges isn’t just a function of maturity or competitive level; it’s a function of what physiological type of 800 runner or Miler you are.