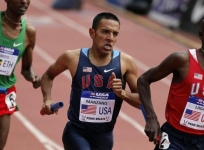 He finished a disappointing 11th in his semifinal heat.

But the experience was memorable in that his parents made their first trip overseas to see him compete.

Manzano moved to Marble Falls, Texas, from Mexico when he was four. At 23, he qualified for the 2008 Beijing Olympics after placing second at the trials behind Bernard Lagat.

The two-time NCAA champion from the University of Texas says he has matured, which has led to what he calls his "best training in a very long time."

He'll face two of the USA's top 1,500 runners at the Adidas Grand Prix in New York on June 9. Lagat, a two-time Olympic medalist in the event, and Matthew Centrowitz, who won bronze at last year's world championships, are scheduled to race.

Then Manzano will compete in the U.S. Olympic trials in Eugene, Ore., to try to qualify for London. The men's 1,500 begins June 28.