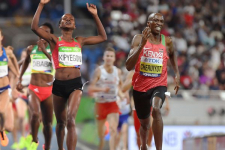 WOMEN
The outcome of the women’s 1500 meters may be most influenced by whether world champion Sifan Hassan decides to do the event or not.

At the time of writing, Hassan was still considering which combination of the 1500m, 5000m and 10,000m she would take on in Tokyo.

Having become the first person to combine the 1500m and 10,000m successfully at the World Championships in Doha 2019, Hassan has made it clear that she is seeking a fresh challenge in Tokyo.

At first, that appeared to be the 5000-0,000m double but that combination has been done before and after defeating Olympic champion Faith Kipyegon over 1500m at the Wanda Diamond League meeting in Florence in June, the Ethiopian-born Dutchwoman began to consider taking on an unprecedented distance treble.

For an athlete who has yet to win an Olympic medal, that would be an extraordinarily brave choice, particularly given that the 1500m and 5000m schedules cross over. The 1500m heats will be held on the morning of Monday, August 2, with the 5000m final that evening.

But Hassan does seem willing to take on this monumental challenge. The 1500m remains close to her heart as the event in which she made her name internationally but it will not offer her an easy ride.

The resurgent Olympic champion Kipyegon will be a much tougher opponent than she was in Doha, which was just a year after she gave birth to her first child.

On that occasion Kipyegon (3:54.22) finished a well-beaten second to Hassan (3:51.95) but with almost two more years of training behind her, the determined Kenyan finally turned the tables at the Diamond League meeting in Monaco earlier this month, when she produced a brilliant performance to win in 3:51.07, the fourth fastest time in history.

This underlines the danger for Hassan: that she will be picked off by specialists on fresh legs in each of her three events if she embarks on the high-risk strategy of tripling.

The 27-year-old Kipyegon has an exceptional championship record, having won or finished second in every major 1500m championship final she has contested since 2014, and has demonstrated that she is in career-best form.

Such is the pool of talent in this event that she is not the only one in that situation. Britain’s ever-reliable Laura Muir has been on the cusp of a global championship breakthrough in this event for some years and is near her best with a 3:55.59 clocking this year that makes her the third-ranked contender.

Ethiopia’s world indoor record-holder Gudaf Tsegay has elected to focus on the 5000m, leaving Freweyni Gebreezibeher Hailu as her country’s top contender (3:56.28 for third place in Monaco) in this event. Her sister Lemlem Hailu and world U20 800m champion Diribe Welteji, who set an Ethiopian U20 record of 3:58.93 in Hengelo, make up the rest of the Ethiopian team.

Two other Tokyo-bound women have broken 4 minutes this year – USA champion Elle Purrier St. Pierre (3:58.03) and Australian Linden Hall (3:59.67). Both will come into medal contention if the Olympic final develops into a typical ‘sit-and-kick’ championship race, which is more likely if Hassan opts out as she tends to run aggressively to bring her superior endurance into play.

The complexion of the event will change immediately based on her decision.

For the men's review, go to: worldathletics.org